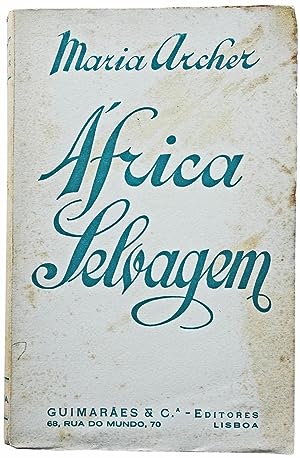 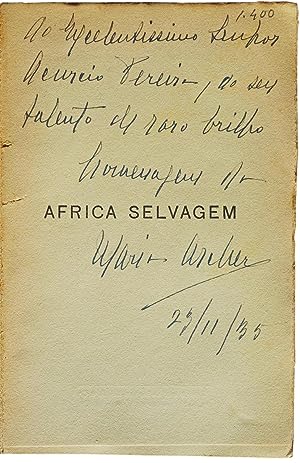 8°, original printed wrappers (some soiling and minor foxing). Very light browning. In very good condition. Author's signed and dated ("23/11/35") six-line presentation inscription to Acúrsio Pereira on half title. 253 pp., (1 l.). *** FIRST (and only?) EDITION of this anthropological work with autobiographical overtones, one of the author's earliest books. While various dates of publication are given, our guess is that all refer to the same edition. Maria Archer spent her childhood and young adult years in Moçambique (1910-1913 and 1921-1926), Guiné (1916-1918), and Angola (1930-1934). Her writing is marked by the courage with which she depicts women at a time when to do so was not politically correct. She was a fierce opponent of the Salazar regime, spending 1954-1974 in forced exile in Brazil, returning to Portugal in 1977 to die five years later, ignored and in misery.Provenance: Acúrcio Pereira (1891-1977) was considered the dean of Portuguese journalists; he wrote for practically every daily newspaper published in Lisbon and Porto during the 1930s, 40s, and 50s, as well as for literary reviews and magazines. In 1911 he joined the Diário de notícias, then headed by Alfredo da Cunha, rising rapidly from reporter to important editorial positions and serving 27 years as editor-in-chief. In addition to several books on diverse subjects, he collaborated on a number of theatrical pieces. See Grande enciclopédia XXI, 110; Actualizaçăo IX, 187. Also Dicionário cronológico de autores portugueses, III, 431. *** On the writer and journalist Maria [Emília] Archer [Eyrolles Baltasar Moreira, (Lisbon 1899-Lisbon 1982)], see Carlos Mendes de Sousa in Biblos, I, 377-9; Dicionário cronológico de autores portugueses, IV, 209-10. Porbase locates a copy at the Arquivo Regional da Madeira and 3 copies at the Biblioteca Nacional de Portugal. Copac locates a copy each at British Library and King's College London. Bookseller Inventory # 36939


Books are offered subject to prior sale. You may email, fax or telephone
to reserve a book; we will confirm its availability as soon as possible.

Overseas orders of rare books and manuscripts are shipped via
Global Express Mail or registered air mail, and shipping charges are billed to the customer.

Satisfaction guaranteed: all purchases from our stock of antiquarian
books and manuscripts are understood to be on approval, and may be
returned within a reasonable time for any reason whatsoever.