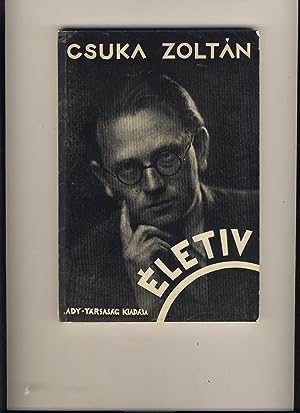 Large octavo 21x14.5cm, wrappers, 128pp. Poems from 1925-1935 by Zoltán Csuka (1901-1984) ---poet, translator, editor, literary historian. Born and raised in the Vojvodina or Bánat-Bacska area of former Hungary. He finished schooling in Pécs and settled in postwar Novi Sad in the new Yugoslavia and launched a significant multilingual journal, Út, which promoted dada and experimental, avant-garde art and literature. It is of great interest because it was a truly international venture which also included Hungarian and Serb artists and writers in this area such as Sava Sumanovic, Árpád Balázs, Dragan Aleksic, Ljubomir Micic, ve Poljanski and Zenit writers from Zagreb, Petar Dobrovic, Mihajlo Petrov, Csuka himself, etc. He collaborated with Lajos Kassák exiled in Vienna and the MA group in this venture, bringing in Bauhaus artists, teachings and theories, and developed a very original publishing house, the publications of which are very scarce and prized. Csuka distinguished himself as a superb translator for both Hungarian and Serbian literature, and is esteemed for creating a mutual understanding and friendship between these two cultures. His interwar works are all quite scarce, with this title being held in only one North American library. This copy in very good condition, notwithstanding library stamps and priced accordingly. Bookseller Inventory # 3005