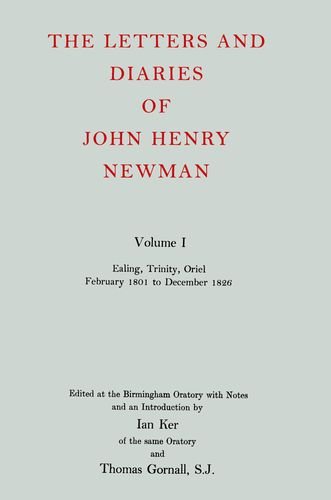 Synopsis: John Henry Newman (1801-90) was brought up in the Church of England in the Evangelical tradition. An Oxford graduate and Fellow of Oriel College, he was appointed Vicar of St Mary's Oxford in 1828; from 1839 onwards he began to have doubts about the claims of the Anglican Church for Catholicity and in 1845 he was received into the Roman Catholic Church. He was made a Cardinal in 1879. His influence on both the restoration of Roman Catholicism in England and the advance of Catholic ideas in the Church of England was profound. From the front flap of this 346 page book: "This first volume begins with Newman as a boy at Ealing School, where at the age of fifteen he underwent the decisive religious conversion of his life. The particular Evangelical beliefs he then imbibed he was later gradually to abandon under various influences at Oxford. His father's bankruptcy in 1821 caused him to think seriously of trying for a fellowship at Oriel, to which he was elected in April 1822. He had already given up the idea of a legal career and had decided to take Holy Orders. From 1824 he worked hard as a curate at St. Clement's, a working class Oxford parish. He also acted as Vice-Principal of St. Alban's Hall from 1825 until 1826 when he was appointed a tutor at Oriel. Apart from four articles (on logic, Cicero,Apollonius of Tyana, and miracles) for the 'Encyclopedia Metropolitana', Newman wrote his first sustained defence of Christianity in 1821, a letter to the 'Christian Observer', which he followed up with a series of long apologetic letters to his brother Charles." And from the rear cover: "The Letters themselves will never be superseded as biography and portrait. It is wonderful to live with Newman day by day and almost hour by hour. The character there revealed is so consistent, the words so inevitable, the narrative so vivid, there is no grayness as of printed pages but everywhere life and color."

Book Description Oxford University Press, 1978. Hardcover. Condition: Good. Dust Jacket Condition: No DJ. 8vo; Picture may not match book; ex-library markings include stamps/labels/card pocket; no DJ, if one issued; light wear/scuffing to boards/spine; text unmarked and clean; Vol 1. Orders will be mailed either on the day ordered or the next business day. Expedited shipping available. Seller Inventory # 127a4298286

4. The Letters and Diaries of John Henry Newman. Volume I: Ealing, Trinity, Oriel, February 1801 to December 1826

5. The Letters and Diaries of John Henry Newman: Volume I: Ealing, Trinity, Oriel, February 1801 to December 1826.

Shipping: US$ 31.57
From Spain to U.S.A.
Destination, rates & speeds
#renderBDPScripts()