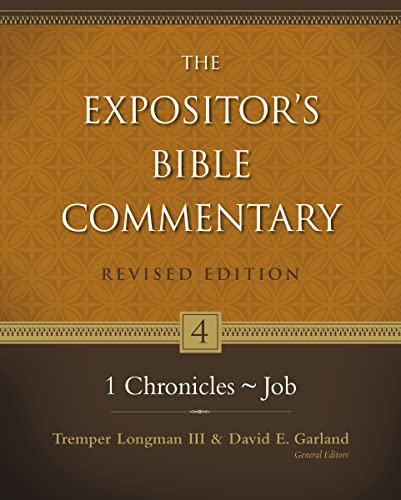 Continuing a Gold Medallion Award-winning legacy, this completely revised edition―1 Chronicles - Job―in The Expositor’s Bible Commentary series puts world-class biblical scholarship in reader’s hands. Based on the original twelve-volume set that has become a staple in college and seminary libraries and pastors’ studies worldwide, this new thirteen-volume edition marshals the most current evangelical scholarship and resources. Its fifty-six contributors, thirty of whom are new, represent the best in evangelical scholarship committed to the divine inspiration, complete trustworthiness, and full authority of the Bible.The thoroughly revised features include:o Comprehensive introductionso Short and precise bibliographieso Detailed outlineso Insightful expositions of passages and verseso Overviews of sections of Scripture to illuminate the big pictureo Occasional reflections to give more detail on important issueso Notes on textual questions and special problems, placed close to the texts in questiono Transliterations and translations of Hebrew and Greek words, enabling readers to understand even the more technical noteso A balanced and respectful approach toward marked differences of opinion

David E. Garland (PhD, Southern Baptist Theological Seminary) is William B. Hinson Professor of Christian Scriptures and dean for academic affairs at George W. Truett Seminary, Baylor University. He is the New Testament editor for the revised Expositor's Bible Commentary and the author of various books and commentaries, including Mark and Colossians/Philemon in the NIV Application Commentary, and the article on Mark in the Zondervan Illustrated Bible Backgrounds Commentary. He and his wife, Diana, reside in Waco, Texas.

Elaine Philips is Professor of Biblical Studies at Gordon College in Wenham, Massachusetts.