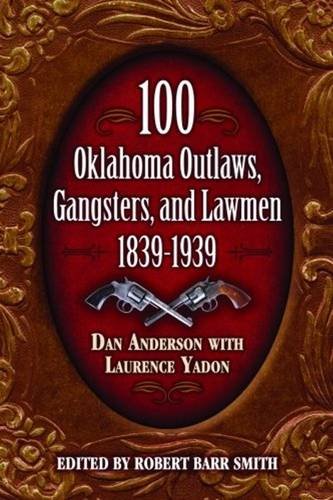 This book includes difficult-to-find information about significant Oklahoma outlaws who lived and worked during the 100-year period ï¿½from horseback to Cadillac.ï¿½ While criminal history within Oklahoma is the focus, famous crimes committed elsewhere by Oklahomans, such as the Barker Gang, Wilbur Underhill, and Machine Gun Kelly, as well as Oklahoma connections to legendary outlaws like Wyatt Earp, Billy the Kid, John Dillinger, and Baby Face Nelson are also mentioned.

"Take[s] readers back to the untamed West when the pistol, the rifle, and the rope provided justice and only the hand-me-down stories divided the lawmen from the lawless."
--ForeWord

The period between 1839 and 1939 bore witness to the sometimes atrocious exploits of renegades and regulators around Oklahoma. The 100 profiles and biographical essays in this volume of popular history include Bonnie and Clyde, Belle Starr, Machine Gun Kelly, the James brothers, the Youngers, the Doolins, the Daltons, and numerous other well-known and lesser-known criminals and officials.

From the revelry of whiskey towns to the shootouts, massacres, and misunderstandings of wild Oklahoma, Dan Anderson and Laurence Yadon present interesting and little-known facts about this romanticized era. Characters include such unlikely personalities as Jim Miller, the devout Methodist assassin; Bud Trainor, a gang operator turned deputy U.S. marshal; and Lloyd Barker, the founder of the Central Park Gang, who became an assistant manager of a snack shop and was later gunned down by his wife.

Dan Anderson is a former newswriter, photographer, features writer, and columnist. He has been honored with multiple awards from the Associated Press for spot news reporting, investigative reporting, and newswriting.
Laurence Yadon is an attorney, mediator, and arbitrator. He and Anderson have also coauthored 200 Texas Outlaws and Lawmen: 1835-1935, Ten Deadly Texans, and Arizona Gunfighters, all available from Pelican.

Book Description Pelican, 2007. Paperback. Condition: VERY GOOD. Pages are intact and are not marred by notes or highlighting, but may contain a neat previous owner name. The spine remains undamaged. Seller Inventory # 1589803841_abe_vg

Book Description Pelican Publishing Company, 2007. Condition: Good. A+ Customer service! Satisfaction Guaranteed! Book is in Used-Good condition. Pages and cover are clean and intact. Used items may not include supplementary materials such as CDs or access codes. May show signs of minor shelf wear and contain limited notes and highlighting. Seller Inventory # 1589803841-2-4

Book Description Pelican Publishing Company, Gretna, LA, 2010. Soft cover. Condition: New. No Jacket. 1st Edition. Pelican Publishing Company, Gretna, LA. 2010. Softcover/Trade Wraps. Stated 3rd Printing. Book is tight, square, and unmarked. Book Condition: New. No DJ. Printed card stock wraps. Wraps are not bent or folded; spine is not creased or split; text is secure in binding. 336 pp 8vo. The period between 1839 and 1939 bore witness to the sometimes atrocious exploits of renegades and regulators around Oklahoma. The 100 profiles and biographical essays in this book of popular history include Clyde and Bonnie, Belle Starr, Machine Gun Kelly, the James brothers, the Youngers, the Doolins, the Daltons, and numerous other well-known and lesser-known criminals and officials. A clean pristine copy. Seller Inventory # 006939

Book Description Pelican, 2007. Paperback. Condition: GOOD. Has little wear to the cover and pages. Contains some markings such as highlighting and writing. Seller Inventory # 1589803841_abe_gd