Items related to 100 PEOPLE WHO ARE SCREWING UP AMERICA (And Al Franken...

Home Goldberg, Bernard 100 PEOPLE WHO ARE SCREWING UP AMERICA (And Al Franken is #37)
Stock Image 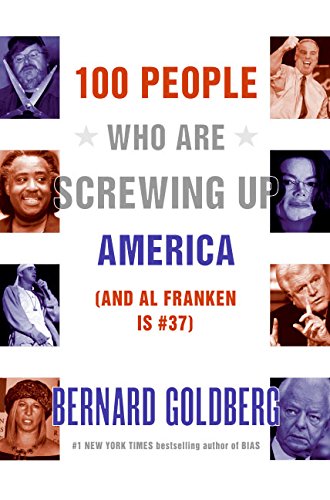 The number one New York Times bestselling author of Bias delivers another bombshell—this time aimed at . . .

100 People Who Are Screwing Up America

No preaching. No pontificating. Just some uncommon sense about the things that have made this country great—and the culprits who are screwing it up.

Bernard Goldberg takes dead aim at the America Bashers (the cultural elites who look down their snobby noses at "ordinary" Americans) . . . the Hollywood Blowhards (incredibly ditzy celebrities who think they're smart just because they're famous) . . . the TV Schlockmeisters (including the one whose show has been compared to a churning mass of maggots devouring rotten meat) . . . the Intellectual Thugs (bigwigs at some of our best colleges, whose views run the gamut from left wing to far left wing) . . . and many more.

Goldberg names names, counting down the villains in his rogues' gallery from 100 all the way to 1—and, yes, you-know-who is number 37. Some supposedly "serious" journalists also made the list, including the journalist-diva who sold out her integrity and hosted one of the dumbest hours in the history of network television news. And there are those famous miscreants who have made America a nastier place than it ought to be—a far more selfish, vulgar, and cynical place.

But Goldberg doesn't just round up the usual suspects we have come to know and detest. He also exposes some of the people who operate away from the limelight but still manage to pull a lot of strings and do all sorts of harm to our culture. Most of all, 100 People Who Are Screwing Up America is about a country where as long as anything goes, as one of the good guys in the book puts it, sooner or later everything will go.

This is serious stuff for sure. But Goldberg will also make you laugh as he harpoons scoundrels like the congresswoman who thinks there aren't enough hurricanes named after black people, and the environmentalist to the stars who yells at total strangers driving SUVs—even though she tools around the country in a gas-guzzling private jet.

With Bias, Bernard Goldberg took us behind the scenes and exposed the way Big Journalism distorts the news. Now he has written a book that goes even further. This time he casts his eye on American culture at large—and the result is a book that is sure to become the voice of all those Americans who feel that no one is speaking for them on perhaps the most vital issue of all: the kind of country in which we want to live.

Bernard Goldberg is the number one New York Times bestselling author of Bias, 100 People Who Are Screwing Up America, and Arrogance. He has won eight Emmy Awards for his work at CBS News and at HBO, where he now reports for the acclaimed program Real Sports. In 2006 he won the Alfred I. duPont–Columbia University Award, the most prestigious of all broadcast journalism awards.


All books are returnable. Please contact us to arrange details before sending the book back.