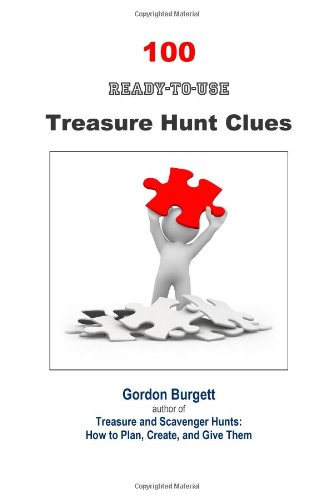 Synopsis: Nothing is more important to a successful, fun treasure hunt party than challenging, well written clues, plus some scavenger hunt items listed and, say, four brainbusters--more on them in a moment.So here Gordon Burgett, author of the long-used, top-selling Treasure and Scavenger Hunts: How to Plan, Create, and Give Them, offers 100 full-form clues in 34 category locations from which the party-giver or party-planner can select the "best" or most appropriate 15 or 20 clues for the teams to simultaneously pursue and solve.The Table of Contents explains the structure of the book and the party/hunt:Introduction 1. How do the clues work? * Two sample clues * But I want to...2. How much can I change the clues?3. Matching the clues to your treasure hunt range 4. How do I pick the “best” of the 100 clue choices? * Don’t blab about the hunt or clues * When do I find the actual clue answers?5. The treasure hunt categories (with number of clues) * Baseball diamonds (4) * Bike store (1) * Bus station (1) * Car repair (1) * Cemetery (1) * Costco (or large store) (2) * Deli (1) * Eatery (8) * Funeral parlor (1) * Gas station (6) * Handicapped parking (2) * Hardware store (1) * In-car activities (6) * Library (2) * Liquor store/bar (2) * Local football team (1) * Mailbox (1) * Miniature golf (2) * Movie theater (2) * Newspaper rack (2) * Other treasure hunters (2) * Post Office (4) * Park (7) * Party house (4) * Phone (1) * Police Department (1) * Rental movie dispenser (1) * RR and Train station (4) * School (2) * See along the street (8) * Specific town places and services (6) * Suds-your-duds laundry (5) * Supermarket (7) * Veterinary clinic (1)6. The “Magic Party Checklist” 7. Twenty scavenger hunt items 8. Four sample brainbusters 9. Now put the clues to work—and have lots of fun! The book tells how the clues work, then explains through the use of two sample clues. In brief, each team gets the same list of 15 or 20 clues and are given 60-90 minutes to find the locations, go to the site location, and find a number usually permanently affixed there. (Clues are written in poetry, code, mixed foreign tongues, prose, and riddles.) When they find the numbers, they are written on the clue sheet, and the team with the most number of correct numbers found usually wins the party prize! (The numbers might be the embedded ZIP code in the Post Office, the distance between the RR tracks at Grove Street, or the number of visible trees more than 12" across in the grade school play yard.)Teams can get more points by finding scavenger items en route (1/2 point for things like a pine cone, a thistle, or a Red Bull can) or by performing brainbusters at the post-hunt party (like reading their poem praising the driver's car).100 Ready-to-Use Treasure Hunt Clues helps the party planner lay out the hunt boundaries, fill in a few clues that rely on local directions, gather the "right" clue numbers, and do all the party things, like invitations, food, team selection, and more.To help design the party Gordon has imported his "Magic Party Checklist" from his Treasure and Scavenger Hunt book, to help all invited easily grasp the simple directions, honor the returning hunt heroes, get fed, and dance the rest of the night away.The book also contains 25 scavenger hunt items likely found in most towns, plus four sample brainbusters to do as they drive around and if they return early. The book includes enough clues for three or four treasure hunts.Finally, the clues are written to apply to almost any location (stark deserts and bald peaks exempted), or they can be quickly modified to work for any party.The fun all starts with the clues. These 100 are ready to go!

About the Author: Gordon currently speaks nationwide about open publishing, niche publishing, and empire building by writing and speaking. He offers keynotes, break-out sessions, seminars, and workshops at conventions, regional meetings, retreats, and through colleges and universities. His other recently published books, of 46, are Surviving Prostate Cancer, How to Get Your Book Published Free in Minutes and Marketed Worldwide in Days, and Niche Publishing: Publishing Profitably Every Time! Burgett has also published 1,700+ articles and offered over 2,000 professional paid spoken presentations. He has owned and directed a publishing company, Communication Unlimited, since 1981. Gordon earned four academic degrees, was twice a university dean, taught Portuguese and history, created a city recreation program in Illinois, directed CARE (and Peace Corps) programs in Colombia and Ecuador, twice studied in Brazil, played a pinch of professional baseball, and led a gold hunt up the Paushi Yaco (Upper Amazon) River in Ecuador. He survived to write blogs and a monthly newsletter. Gordon also wrote a very popular book called Treasure and Scavenger Hunts: How to Plan, Create, and Give Them that created the demand for a list of new, localized treasure hunt clues. That s the cause for this book!