Items related to 100 YEARS OF HOLLYWOOD: A Century of Movie Magic 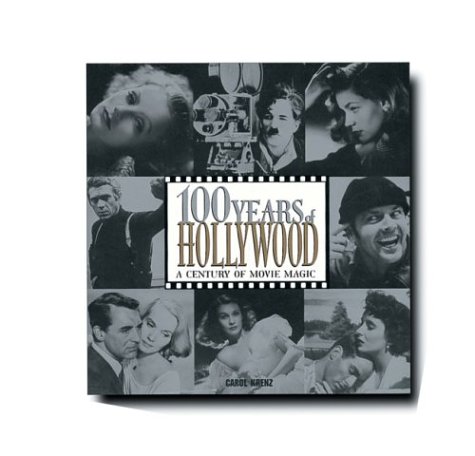 100 YEARS OF HOLLYWOOD: A Century of Movie Magic

"Informative & delightful celebration of the history of the film." Illustrated with over 150 stunning B&W Photos. Black cloth cover with Silver Lettering to spine. 171 Pages + Academy Award Winners and Index. 11 1/2" Tall. Very slight edge wear at spine ends. No inscriptions except old penciled price in corner of free endpaper. Jacket has slight edge wear and a chip on back corner. Size: 4to - over 9ľ" - 12" tall. Bookseller Inventory # 008766

Plunge into the magic of moviemaking with a gorgeous chronicle of nearly a century of unforgettable films. From the very start, Hollywood showcased an alluring combination of personality, technology, and creative vision. Every one of the stills and behind-the-scenes shots reproduced here capture cinema's glamour and excitement, while the lively text follows the Hollywood moguls and masterminds, brightest stars, and greatest movies. Along the way, meet visionary pioneers, such as D.W. Griffith and Cecil B. DeMille; the golden boys of the "Golden Age," including George Cukor, Frank Capra, and Alfred Hitchcock; and powerful producers. In breathtaking photos, gaze at the beauteous stars, strong and silent heroes, and matinee idols, from Lillian Gish, Katharine Hepburn, and Susan Sarandon to Rudolph Valentino, Clark Gable, and Jack Nicholson.. Relive the fabulous films in every genre, from the western to the musical. Informative and delightful, this is an essential reference for all who love the movies.


I accept most major Credit Cards through the ABE Checkout, also PAYPAL, Postal Order, Bank Draft and U.K. Cheque(please make it payable to Aesop Attic Bookstore.)
Most books are despatched same day or next working day (including Saturday morning), certainly within 2 working days.
All Book Descriptions are made in Good Faith, however if any item should be not as described please return it within 7 days for a full refund.
For additional information or more photos please contact me via "Ask Booksel...