Items related to 100 Years: Wisdom From Famous Writers on Every Year...

Home Joshua Prager 100 Years: Wisdom From Famous Writers on Every Year of Your Life...
Stock Image 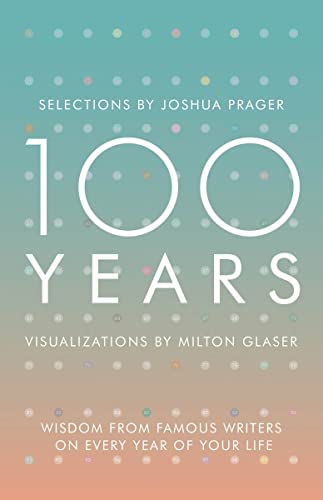 100 Years: Wisdom From Famous Writers on Every Year of Your Life Format: Hardcover

An extraordinary literary journey, 100 Years celebrates every age from birth to 100 with quotations from the world’s greatest writers.

This literary tapestry of the human experience will delight readers of all backgrounds. Moving year by year through the words of our most beloved authors, the great sequence of life reveals itself—the wonders and confinements of childhood, the emancipations and frustrations of adolescence, the empowerments and millstones of adulthood, the recognitions and resignations of old age. This trove of wisdom—featuring immortal passages from Arthur Rimbaud, Sylvia Plath, Virginia Woolf, David Foster Wallace, William Shakespeare, Herman Melville, Jane Austen, and Maya Angelou, among many others—reminds us that the patterns of life transcend continents, cultures, and generations. As Thomas Mann wrote of our most shared human experience: "It will happen to me as to them." Designed by the legendary Milton Glaser, who created the I ♥ NY logo, 100 Years brings together color, type, and text to illuminate the ebb and flow of an entire life.

Joshua Prager is the author of The Echoing Green, which was a Washington Post Best Book of the Year, and Half-Life, which The Economist called “an impressive work of self-scrutiny.” He writes for publications including Vanity Fair and the New York Times. He lives in New York City with his wife and daughter.

Milton Glaser is among the most celebrated graphic designers in the United States. In 2009, Mr. Glaser received the National Medal of the Arts from President Obama. He lives with his wife in New York City.