Items related to 1001 Inventions That Changed the World 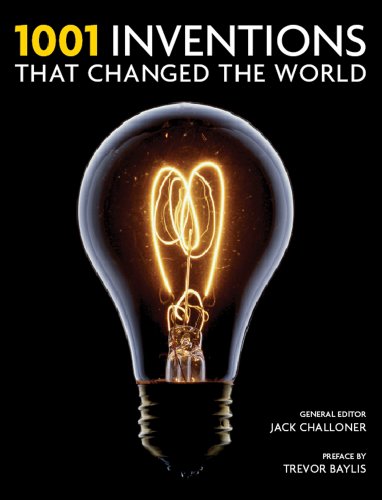 1001 Inventions That Changed the World

Title: 1001 Inventions That Changed the World

We take thousands of inventions for granted, using them daily and enjoying their benefits. But how much do we really know about their origins and development? This absorbing new book tells the stories behind the inventions that have changed the world, with details about--

(back cover)
Every day we make use of countless inventions that we take for granted. Some, such as safety pins and toothbrushes, are simple domestic items that make our lives easier. Others, such as traffic lights and antibiotics, can make the difference between life and death. But how much do you actually know about these objects that are part of out daily lives? 1001 Inventions That Changed the World is an enthralling guide to the world's most important scientific and technological advances. Authoritatively written by a team of historians, designers, scientists, and anthropologists, 1001 Inventions That Changed the World tells the stories behind the innovations, thus presenting a comprehensive history of the world--through invention and discovery.

(front flap)
Have you ever wondered who made the first moving staircase that eventually became the escalator--or mused over when the first pair of scissors were used? From the development of the abacus to the creation of the zipper, 1001 Inventions That Changed the World presents a fascinating and comprehensive review of the scientific and technological breakthroughs that have had an impact on the human experience. Covering events that start with the invention of the wheel circa 4000 B.C.E. and progress to the cloning of Dolly the sheep in 1996, this wide-ranging book explores the stories behind each innovation, tracing its development from concept to completion. Engaging, accessible, and enlightening, 1001 Inventions That Changed the World is a unique history of human inventiveness and inquisitiveness. It reveals the origins and evolution of everything from the invention of paper to the design of the personal computer, and from the discovery of penicillin to the development of the contraceptive pill. It investigates the invention of simple items we now take for granted--the paper clip, the rivet, the toothbrush, the seat belt--and the development of complex medical and technological advances--antibiotics, jet propulsion, the atomic bomb, and genetically modified organisms.

Fascinating photos and illustrations complement authoritative summaries that are supplemented with intriguing and surprising quotations from the inventors and early users. Entertaining to dip into, 1001 Inventions That Changed the World can also be read as a comprehensive history of the world through human inventions. Science and technology expert Jack Challoner and his team of historians, designers, scientists, and anthropologists take you on a journey of discovery in this enthralling study of human achievement.

(back flap)
Jack Challoner studied physics at Imperial College, London, and teacher training at Kingston-upon-Thames. He worked in the Education Unit of the Science Museum, London, where he explained scientific developments to visitors. Jack has written nearly 30 books on science and technology topics for readers of all ages and has acted as consultant science editor on many other books. He also presents science shows in both formal and informal educational settings. He currently lives in France with his wife and daughter.