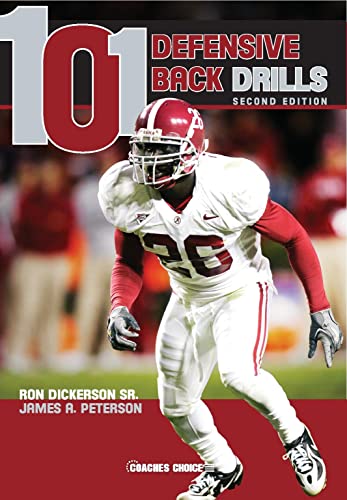 Synopsis: The defensive back drills in 101 Defensive Back Drills (Second Edition) are applicable and effective at all completive levels. The drills in this book have been collected, field-tested, and applied by a coach with more than four decades of collegiate football experience. Properly designed drills can have an extraordinary value, enabling coaches to better develop the skills of their players. The types of drills featured include warm-up, quickness, speed & agility, movement, reaction, coverage, tackling, and fumble recovery.

About the Author: Ron Dickerson Sr. is retired from coaching after an extensive and very successful career that spanned more than four decades. A 1971 graduate of Kansas State University, where he had a distinguished football career, earning three letters as a cornerback for the Wildcats, Dickerson began his coaching career at his alma mater in 1972, following an injury-shortened stint as an NFL player. He served as KSU s secondary coach for four seasons (1972-75), before moving on to the University of Louisville for three years in the same position. Other stops in Dickerson s coaching career include stints as an assistant at the University of Pittsburgh (1978-80), the University of Colorado under renowned head coach Bill McCartney (1982-84), Penn State University for six seasons (1985-90), Clemson University (1991-92), and Gardner-Webb University (2011-12), where he had the opportunity to come out of retirement to work for his son, Ron Jr. who was the head coach.
Dickerson had three tours of duty as a head coach (Temple University, 1992-97; Alabama State University, 1998-99; and Lambuth University, 2010). At every stop of his illustrious career, his players and teams were known for their toughness and their ability to always exert a maximum effort.
Residents of Montgomery, Alabama, Ron and his wife of more than four decades, Jeannie, have two children son, Ron Jr., and daughter, Rashawn. Ron is currently working on completing his next book, No Seat at the Table, a history of black coaches in American football.
James A. Peterson, Ph.D., is a freelance writer. A 1966 graduate of the University of California at Berkeley, Peterson served as a full professor on the faculty of the United States Military Academy at West Point for almost two decades. A prolific writer, Peterson has written or co-authored almost 100 books and more than 200 published articles. A fellow of the American College of Sports Medicine, he has appeared on several national television shows, including ABC s Good Morning America, the CBS Evening News, ABC s Nightline, and The Home Show. He and his wife of more than four decades, Susan, currently reside in Monterey, California.