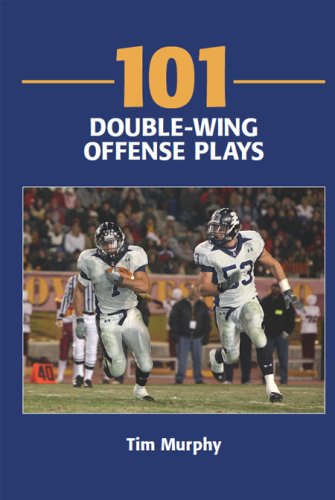 Synopsis: The double-wing is an offensive system that s whole is greater than the sum of its parts. It is the definition of synergy, which is synchronized energy. Each player has a role that is specific and important. The double wing enables groups of young men to work together as a team to accomplish things many may have thought impossible. The double wing has the greatest combination of power and deception you will ever find in an offense. This offense is a ball-control offense that moves the chains and produces very few turnovers. At the same time, this system has a surprisingly large amount of big-play components. Tim Murphy s 101 Double-Wing Offense Plays is very easy to understand and the philosophies on how to attack defenses can help improve any coach s game. The book is a must-have for anyone trying to better understand the high-powered double-wing offense. Chapters are separated by series and include: power series, Trojan series, G series, midline series, rocket series, tackle trap series, striker series, and wedge series.

About the Author: Tim Murphy is the head football coach at Clovis East (CA) High School, a position he assumed in 2001. Since his arrival at Clovis East, he has led the Timberwolves to a 47-11 record. In his exceptional career as a head coach, his teams have achieved great success running both the double wing and the I-wing offense. In the past eight years of employing the double wing, his squads have made eight straight playoff appearances, have won six league championships and two CIF state championships, and have earned three state rushing titles. Six times, Murphy s teams have rushed for more than 4,000 yards, including the all-time large school record in Northern and Central California of 5,019 yards in 1999. He is one of the most highly respected interscholastic coaches in the game.