Items related to 102 Minutes: The Unforgettable Story of the Fight to... 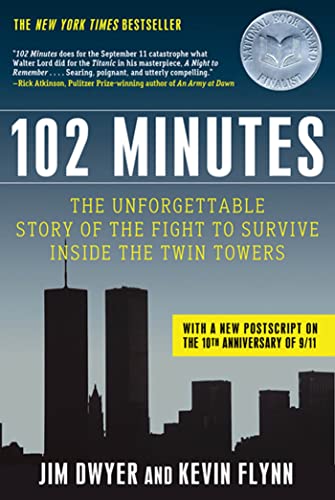 102 Minutes: The Unforgettable Story of the Fight to Survive Inside the Twin Towers (Paperback)

Paperback. At 8:46 a.m. that morning, fourteen thousand people were inside the World Trade Centre just starting their workdays, but over the next 102 minutes, each would become part of a drama for th.Shipping may be from multiple locations in the US or from the UK, depending on stock availability. 353 pages. 0.435. Bookseller Inventory # 9780805094213

Title: 102 Minutes: The Unforgettable Story of the ...

"102 Minutes does for the September 11 catastrophe what Walter Lord did for the Titanic in his masterpiece, A Night to Remember . . . Searing, poignant, and utterly compelling."―Rick Atkinson, Pulitzer Prize-winning author of An Army at Dawn

Hailed upon its hardcover publication as an instant classic, the critically acclaimed New York Times bestseller and National Book Award Finalist for Nonfiction is now available in a revised edition timed to honor the tenth anniversary of the attacks of September 11, 2001.

At 8:46 a.m. that morning, fourteen thousand people were inside the World Trade Center just starting their workdays, but over the next 102 minutes, each would become part of a drama for the ages. Of the millions of words written about this wrenching day, most were told from the outside looking in. New York Times reporters Jim Dwyer and Kevin Flynn draw on hundreds of interviews with rescuers and survivors, thousands of pages of oral histories, and countless phone, e-mail, and emergency radio transcripts to tell the story of September 11 from the inside looking out.

Dwyer and Flynn have woven an epic and unforgettable account of the struggle, determination, and grace of the ordinary men and women who made 102 minutes count as never before.

In 102 Minutes: The Untold Story of the Fight to Survive Inside the Twin Towers, New York Times writers Jim Dwyer and Kevin Flynn vividly recreate the 102-minute span between the moment Flight 11 hit the first Twin Tower on the morning of September 11, 2001, and the moment the second tower collapsed, all from the perspective of those inside the buildings--the 12,000 who escaped, and the 2,749 who did not. It's becoming easier, years later, to forget the profound, visceral responses the Trade Center attacks evoked in the days and weeks following September 11. Using hundreds of interviews, countless transcripts of radio and phone communications, and exhaustive research, Dwyer and Flynn bring that flood of responses back--from heartbreak to bewilderment to fury. The randomness of death and survival is heartbreaking. One man, in the second tower, survived because he bolted from his desk the moment he heard the first plane hit; another, who stayed at his desk on the 97th floor, called his wife in his final moments to tell her to cancel a surprise trip he had planned. In many cases, the deaths of those who survived the initial attacks but were killed by the collapse of the towers were tragically avoidable. Building code exemptions, communication breakdowns between firefighters and police, and policies put in place by building management to keep everyone inside the towers in emergencies led, the authors argue, to the deaths of hundreds who might otherwise have survived. September 11 is by now both familiar and nearly mythological. Dwyer and Flynn's accomplishment is recounting that day's events in a style that is stirring, thorough, and refreshingly understated. --Erica C. Barnett


We guarantee the condition of every book as itżs described on the Abebooks web sites. If youżve changed
your mind about a book that youżve ordered, please use the Ask bookseller a question link to contact us
and weżll respond within 2 business days.
Books ship from California and Michigan.


Orders usually ship within 2 business days. All books within the US ship free of charge. Delivery is 4-14 business days anywhere in the United States.

Books ship from California and Michigan.

If your book order is heavy or oversized, we may contact you to let you know extra shipping is required.