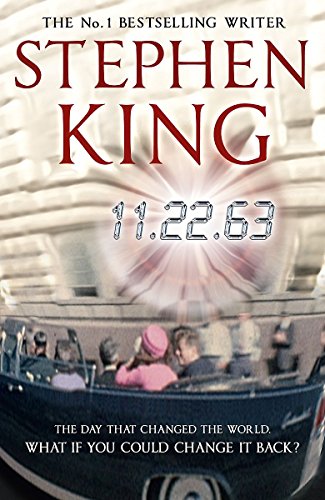 Quantity Available: > 20
View all  copies of this book
Buy New
Price: US$ 22.37 Convert Currency
Shipping: US$ 8.98 From India to U.S.A. Destination, rates & speeds
Add to basket

On November 22, 1963, three shots rang out in Dallas, President Kennedy died, and the world changed forever. If you had the chance to change the course of history, would you? Would the consequences be worth it? Jake Epping is a thirty-five-year-old high school English teacher in Lisbon Falls, Maine, who makes extra money teaching adults in the GED program. He receives an essay from one of the students—a gruesome, harrowing first person story about the night 50 years ago when Harry Dunning’s father came home and killed his mother, his sister, and his brother with a hammer. Harry escaped with a smashed leg, as evidenced by his crooked walk. Not much later, Jake’s friend Al, who runs the local diner, divulges a secret: his storeroom is a portal to 1958. He enlists Jake on an insane—and insanely possible—mission to try to prevent the Kennedy assassination. So begins Jake’s new life as George Amberson and his new world of Elvis and JFK, of big American cars and sock hops, of

Stephen King has written some fifty books and novellas, all of them worldwide bestsellers. Among his most recent are FULL DARK, NO STARS, UNDER THE DOME, JUST AFTER SUNSET, the DARK TOWER novels and his acclaimed non-fiction book, ON WRITING. He won America's prestigious National Book Award and was voted Grand Master in the 2007 Edgar Allen Poe awards. He lives with his wife, novelist Tabitha King, in Maine, USA.


All books are new. We accept payments by the following methods:

Cheques may be made payable to BookVistas.