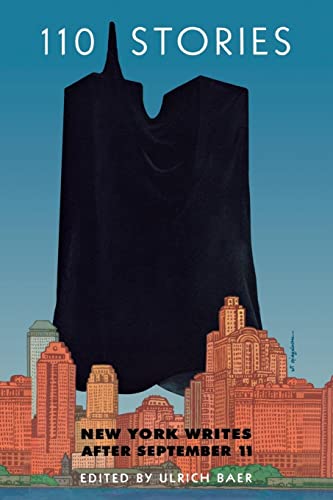 AbeBooks Seller Since May 5, 2001 Seller Rating

Signed by Jonathan Lethem at his contribution. A collage of responses to September 11, both original and reprinted, from the city with the highest concentration of literati in the world. An Uncorrected Proof signed by Lethem and Melvin Jules Bukiet is included. ; 333 pages; Signed by Contributor. Bookseller Inventory # 20055

New York is a city of writers. And when the city was attacked on 9/11, its writers began to do what writers do, they began to look and feel and think and write, began to struggle to process an event unimaginable before, and even after, it happened. The work of journalists appeared immediately, in news reports, commentaries, and personal essays. But no single collection has yet recorded how New York writers of fiction, poetry, and dramatic prose have responded to 9/11.

Now, in 110 Stories, Ulrich Baer has gathered a multi-hued range of voices that convey, with vivid immediacy and heightened imagination, the shock and loss suffered in September. From a stunning lineup of 110 renowned and emerging writers-including Paul Auster, Lynne Sharon Schwartz, Edwidge Danticat, Vivian Gornick, Phillip Lopate, Dennis Nurkse, Melvin Bukiet, Susan Wheeler-these stories give readers not so much an analysis of what happened as the very shape and texture of a city in crisis, what it felt like to be here, the external and internal damage that the city and its inhabitants absorbed in the space and the aftermath of a few unforgettable hours. As A.M. Homes says in one of the book's eyewitness accounts, "There is no place to put this experience, no folder in the mental hard drive that says, 'catastrophe.' It is not something that you want to remember, not something that you want to forget." This collection testifies to the power of poetry and storytelling to preserve and give meaning to what seems overwhelming. It showcases the literary imagination in its capacity to gauge the impact of 9/11 on how we view the world.

Just as the stories of the World Trade towers were filled with people from all walks of life, the stories collected here reflect New York's true diversity, its boundless complexity and polyglot energy, its regenerative imagination, and its spirit of solidarity and endurance.

The editor’s proceeds will be donated to charity. Cover art donated by Art Spiegelman.

Ulrich Baer is Vice Provost of Globalization and Multiculturalism at New York University.


An online business specializing primarily in Crime Fiction and Modern First Editions. We're members of the Antiquarian Booksellers Association of America, and the Rocky Mountain Antiquarian Booksellers Association. We also exhibit at book fairs, and you can view our entire inventory directly on our website: www.bungalowbooks.com. All books are sold subject to approval and may be returned for any reason within 30 days. Colorado residents please add 7.4% sales tax. We accept Visa, MasterCard, Amer...


Our standard shipping method is Media Mail and Priority Mail is available upon request.