Items related to 13 Years of Bondage: The Photography of Rick Castro 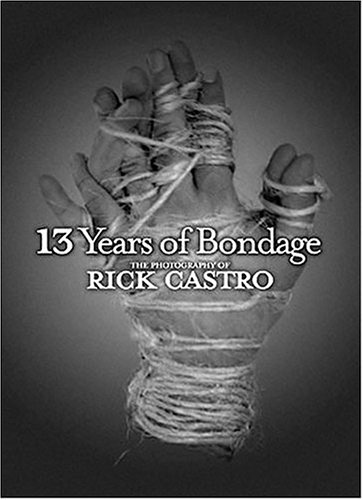 13 Years of Bondage: The Photography of Rick Castro

Title: 13 Years of Bondage: The Photography of Rick...

13 YEARS OF BONDAGE: The Photography of Rick Castro is a handsomely produced and stimulating collection of duotone plates by photographer/filmmaker Rick Castro.

This hardcover monograph consists features 105 images- primarily male nudes - most in bondage or in a fetishized context.

Those familiar with Castro's evocative erotic images can attest to their celebration of the whimsical, passionate and essentially fluid nature of desire. Street hustlers from Los Angeles' famed Santa Monica Boulevard, intricately bound with leather and rope, and being the primary subjects of Castro's lens since the early 90s, populate a good part of this volume. Castro has taken these "unsung, decadent idols" from the street and portrayed them to reflect his vision. 13 YEARS OF BONDAGE takes us on an aesthetic, cultural and social journey through a "road-less-travelled" in contemporary sexual culture. Castro's images not only challenge, but offers a gaze that celebrates all kinds of sensuality.

Rick Castro is an independent filmmaker & photographer living and working in Los Angeles.

Rick's photographs and films explore the wide world of fetish and the fringes of sex culture. CASTRO, a monograph of his early work, was published in 1990 by the Tom of Finland Foundation. Rick self-published his own successful zine, THE BONDAGE BOOK, throughout the 90's. His films HUSTLER WHITE and PLUSHIES & FURRIES have won critical acclaim and continue to screen to enthusiastic audiences. Rick Castro's Photographs exhibit in galleries and institutions worldwide.