Items related to 1492: The Year the World Began 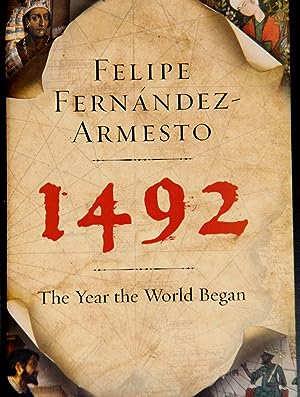 Quantity Available: 1
View all  copies of this book
Buy Used
Price: US$ 14.57 Convert Currency
Shipping: US$ 16.93 From Canada to U.S.A. Destination, rates & speeds
Add to basket

Stated First Edition/First Printing. Synopsis: 1492: The Year the World Began is a look at one of the most fascinating years in world history, the year when many believe the modern world was born. Historian Felipe Fernandez-Armesto, author of Millennium, covers such iconic figures as Christopher Columbus and Alexander Borgia and explores cultures as diverse as that of Spain, China, and Africa to tell the story of 1492, a momentous year whose lessons are still relevant today. Bookseller Inventory # 002857

1492: The Year the World Began is a look at one of the most fascinating years in world history, the year when many believe the modern world was born. Historian Felipe Fernandez-Armesto, author of Millennium, covers such iconic figures as Christopher Columbus and Alexander Borgia and explores cultures as diverse as that of Spain, China, and Africa to tell the story of 1492, a momentous year whose lessons are still relevant today

The world would end in 1492—so the prophets, soothsayers, and stargazers said. They were right. Their world did end. Ours began.

In this extraordinary, sweeping history, Felipe Fernández-Armesto traces key elements of the modern world back to that single, fateful year. Everything changed in 1492: the way power and wealth were distributed around the globe, the way major religions and civilizations divided the world, and the increasing interconnectedness of separate economies that we now call globalization. Events that began in 1492 transformed the whole ecological system of the planet. Our individualism and the very sense we share of inhabiting one world, as partakers in a common humanity, took shape and became visible in 1492.

In search of the origins of modernity, 1492 takes readers on a journey around the globe of the time, in the company of real-life travelers, drawing together the threads that came to bind the planet. The tour starts in Granada, where the last Islamic kingdom in Europe collapsed, then moves to Timbuktu, where a new Muslim empire triumphed. With Portuguese explorers, we visit the court of the first Christian king in the southern hemisphere. We join Jews expelled from Spain as they cross the Mediterranean to North Africa, Italy, and Istanbul. We see the flowering of the Renaissance in the Florence of Lorenzo the Magnificent and go to the corrupt Rome of Alexander Borgia. We see the frozen frontiers of the dynamic, bloody Russia of Ivan the Great and hear mystical poets sing on the shores of the Indian Ocean. We sail the Atlantic with Columbus. In the depths of an old volcanic crater in the Canary Islands, we witness the start of the first European overseas empire. We observe the Aztecs and Incas laying the foundations of a New World in the Americas.

Wars and witchcraft, plagues and persecutions, poetry and prophecy, science and magic, art and faith—all the glories and follies of the time are in this book. Everywhere, new departures marked the start of a new configuration for humankind, revealing how and why the modern world is different from the worlds of antiquity and the Middle Ages.

History seems a patternless labyrinth—but a good guide can trace our paths through it back to the moment when some of the most striking features of today's world began.