Items related to The 15 Biggest Lies in Politics 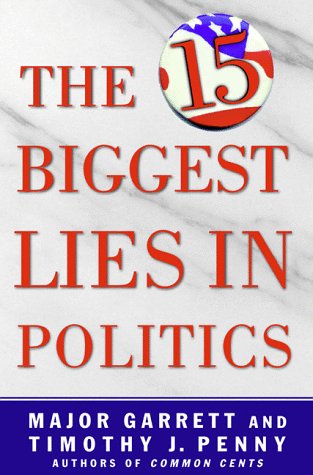 The 15 Biggest Lies in Politics

Title: The 15 Biggest Lies in Politics

In the world of politics, it's hard to separate the truth from the lies. In this strongly argued but nonpartisan book, Major Garrett and Timothy J. Penny draw on their combined decades of experience watching government work to illuminate the deceptions and delusions to which we as citizens are subjected every election season. Here are some of the lies:

The Washington establishment doesn't want you to read The 15 Biggest Lies in Politics. "This book is designed to reveal the most insidious lies spun by special-interest groups, parroted by politicians, and accepted by the media," write authors Major Garrett, a reporter for U.S. News & World Report, and Timothy J. Penny, a former Democratic Congressman from Minnesota. Each of their chapters intends to defy conventional wisdom; they spin out readable mini-essays on a variety of "lies": "Gun Control Reduces Crime," "Money Buys Elections," "Social Security Is a Sacred Government Trust," and "Medicare Works." The book is thankfully nonpartisan--the final two chapters debunk the claims that Republicans believe in small government and Democrats are compassionate. This is a useful citizen's guide to national political debates--quick but thorough, contrarian but true, and accessible but wise. --John J. Miller