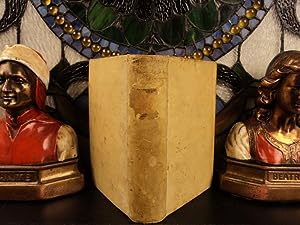 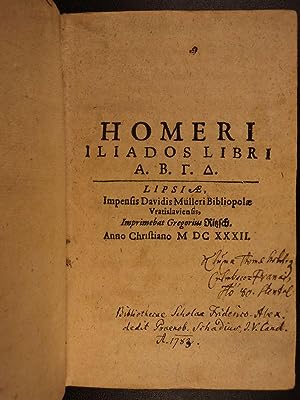 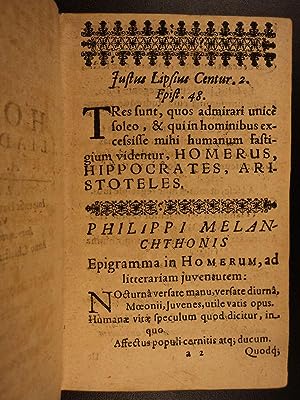 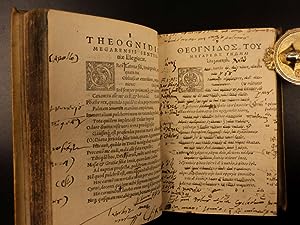 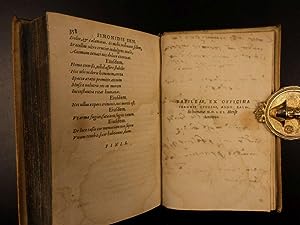 AbeBooks Seller Since May 31, 2013 Seller Rating

1561 Theognis of Megara + 1632 Homer s Iliad GREEK TEXTS Poetry ROME Mythology 2 Works in 1 Binding / Neither Found Selling Worldwide! The Iliad is an ancient Greek epic poem in dactylic hexameter, traditionally attributed to Homer. Set during the Trojan War, the ten-year siege of the city of Troy (Ilium) by a coalition of Greek states, it tells of the battles and events during the weeks of a quarrel between King Agamemnon and the warrior Achilles. Homer is the traditionally-credited creator of the Iliad and the Odyssey, revered as the greatest of Greek epic poets. These epics lie at the beginning of the Western canon of literature and have had an enormous influence on the history of literature. Theognis of Megara (Greek: Théognis ho Megareús) was a Greek lyric poet active in approximately the sixth century BC. The work attributed to him consists of gnomic poetry quite typical of the time, featuring ethical maxims and practical advice about life. We do not find any other examples of either of these works bound with or without each other anywhere else worldwide! 16th-centry printings of Theognis are extremely rare! Main author: Homer Title: Homeri Iliados Libri A. B. G. D. Published: Lipsiae Mullerus Lipsiae Ritzsch Leipzig, 1632. Main author: Theognis Title: Theognidis Megarensis Sententiae elegiacae : cum interpretatione & scholijs Eliae Vineti : accesserunt et horum poetarum opera sententiosa: Phocylidis, Pythagorae, Solonis, Tyrtaei, Naumachij, Callimachi, Mimnermi, Eueni, Rhiani, Eratosthenis, Panyasidis, Lini, Menecratis, Posidippi, Metrodori, Simonidis, Senariorum libellus Published: Basileae : Ex officina Ioannis Oporini, 1561. Language: Latin & Greek Notes & contents: 2 famous works bound in 1 vellum binding FREE SHIPPING WORLDWIDE Wear: wear as seen in photos Binding: tight & secure vellum binding Pages: complete with all 87 + 358 pages; plus indexes, prefaces, and such Publisher: see above Size: ~6in X 4in (15cm x 10cm) Photos available upon request. Bookseller Inventory # ABE-18294421007

"I cannot live without books" -Thomas Jefferson We agree! Weżve now been buying and selling books for a very long time indeed as we celebrate over 8,000 successful transactions to nearly every country in the world! Customer satisfaction has always been our first priority as we believe that the key to good business is happy and loyal buyers. Our Customer Service Core Values: Do everything with excellence. Communication is important. This is why we respond to all emails within 24 hours, but usually within a few hours. Buyers should be confident. This is why we offer a full money-back guarantee for any reason without reservation. We also fully guarantee the successful delivery of your package to any country in the world with full package-tracking capabilities. These books are treasures and we treat them as such. This is why we carefully package our treasures in such a way to ensure a very fast (same-day shipment) and very safe delivery.


Customer satisfaction is our first priority. Notify us within 7 days of receiving your item and we will offer a full refund guarantee without reservation.