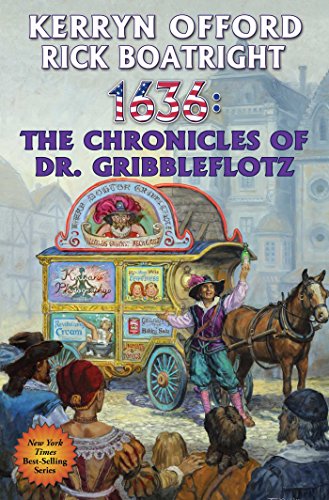 1636: The Chronicles of Dr. Gribbleflotz (Ring of Fire)

Phillip Theophrastus Gribbleflotz, the world's greatest alchemist and a great-grandson of Paracelsus—and a Bombast on his mother's side—was a man history had forgotten. But when the town of Grantville was transported by a cosmic accident from modern West Virginia to central Germany in the early seventeenth century, he got a second chance at fame and fortune.

The world's greatest alchemist does not make household goods. But with suitable enticements Gribbleflotz is persuaded to make baking soda and then baking powder so that the time-displaced Americans can continue to enjoy such culinary classics as biscuits and gravy. Applying his superb grasp of the principles of alchemy to the muddled and confused notions the Americans have concerning what they call “chemistry,” Gribbleflotz leaves obscurity behind.

In his relentless search for a way to invigorate the quinta essential of the human humors, Gribbleflotz plays a central role in jump-starting the seventeenth century’s new chemical and marital aids industries—and pioneering such critical fields of human knowledge as pyramidology and aura imaging. These are his chronicles.

About Eric Flint’s Ring of Fire series:
“This alternate history series is ... a landmark...”—Booklist

“...reads like a technothriller set in the age of the Medicis...”—Publishers Weekly

About the Author: Kerryn Offord stumbled on to the 1632 universe in the beginning of 2003 when his father asked him to look up when 1633 would be released in paperback. He discovered Baen's Bar, and has been active in the 1632 conferences ever since. He has had over fifty stories published in the Grantville Gazette, and has plans for many more. Although Dr. Gribbleflotz is Rick Boatright's creation, Kerryn lays claim to creating Dr. Phil.

Rick Boatright is exactly the same age as Bill Gates and like Bill has been a software developer since the early 1970s, but in Rick's case a developer for not-for-profit social service agencies. He's been a moderator of online forums as long as online forums have existed. Since 2001 he's been a writer and editor, as well as the Head Geek, for Eric Flint's 1632 alternate history world. He also held the Head Geek title for Jim Baen's Universe magazine. He is the perpetrator of the annual "Weird Tech" lectures associated with the 1632 minicon and was the creator of Ring of Fire series character, Dr. Gribbleflotz, the world's greatest alchemist.

Book Description Baen, 2017. Condition: Good. Reprint. Former Library book. Shows some signs of wear, and may have some markings on the inside. Seller Inventory # GRP114449505

Book Description Baen, 2017. Mass Market Paperback. Condition: Good. Connecting readers with great books since 1972. Used books may not include companion materials, some shelf wear, may contain highlighting/notes, may not include cdrom or access codes. Customer service is our top priority!. Seller Inventory # S_235358229

Book Description Condition: Acceptable. The item is very worn but continues to work perfectly. Signs of wear can include aesthetic issues such as scratches, dents and worn corners. All pages and the cover are intact, but the dust cover may be missing. Pages may include moderate to heavy amount of notes and highlighting,but the text is not obscured or unreadable. May NOT include discs, access code or other supplemental materials. Seller Inventory # 31UIGP001V3D_ns

Book Description Baen, 2017. Condition: Good. A+ Customer service! Satisfaction Guaranteed! Book is in Used-Good condition. Pages and cover are clean and intact. Used items may not include supplementary materials such as CDs or access codes. May show signs of minor shelf wear and contain limited notes and highlighting. Seller Inventory # 1481482653-2-4

Book Description Baen, 2017. Paperback. Condition: GOOD. Has little wear to the cover and pages. Contains some markings such as highlighting and writing. Seller Inventory # 1481482653_abe_gd

Book Description Baen Books, United States, 2017. Paperback. Condition: New. Reprint. Language: English. Brand new Book. Phillip Theophrastus Gribbleflotz, the world's greatest alchemist and a great-grandson of Paracelsus-and a Bombast on his mother's side-was a man history had forgotten. But when the town of Grantville was transported by a cosmic accident from modern West. Seller Inventory # BZV9781481482653

Book Description Baen Books, United States, 2017. Paperback. Condition: New. Reprint. Language: English. Brand new Book. Phillip Theophrastus Gribbleflotz, the world's greatest alchemist and a great-grandson of Paracelsus-and a Bombast on his mother's side-was a man history had forgotten. But when the town of Grantville was transported by a cosmic accident from modern West. Seller Inventory # BZV9781481482653