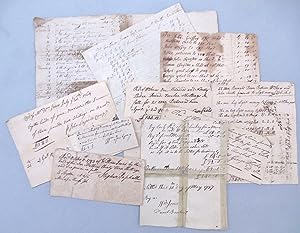 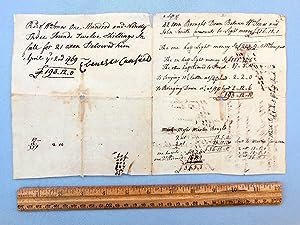 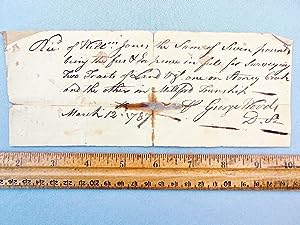 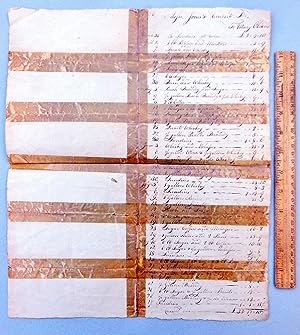 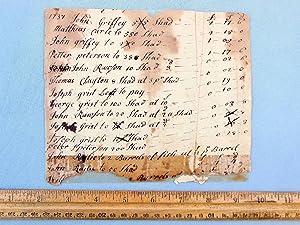 NINE PIECES of EPHEMERA / HAND-WRITTEN DOCUMENTS, COLONIAL and POST REVOLUTIONARY WAR AMERICANA, related to WILLIAM JONES and OTHERS, apparently from PENNSYLVANIA (as per a few indications in the documents, and my research into a few of the names in the documents). All the items are handwritten on various size pieces of laid paper, some have watermarks.Following is a descriptive list of EACH OF THE 9 ITEMS (caps are usually mine): (1) 1783 Handwritten financial document dated October 11th, 1783. Writing on one side only, small calculation on backside. "Received October 11th 1783 of WILLIAM JONES by the hand of HIS SON MATHEW thirty three shillings and six pence in full." Signed by STEPHEN PASCHALL. Paper in FAIR CONDITION, yellowed with age; creases from folding; tape used along top edge for mending. (2) 1769 Handwritten banking memo. Single sheet of paper with miscellaneous notes and calculations. Writing on both sides. Reference to a purchase of 21 oxen on April 2nd, 1769 in the amount of one hundred and ninety three pounds twelve shillings by a William Jones. "Received of WM. JONES One Hundred and Ninety Three Pounds Twelve Shillings in full for 21 oxen Delivered him April 2nd 1769." Signed by EBENEZER CANFIELD. Ledger notes include: "28 oxen Brought Down Between WM. JONES and JOHN SMITH."; "MOSES MARTIN bought 2 at."; "CHARLES MOORE'S horse came Nov 27, Took away March 26th." Paper in POOR CONDITION, yellowed and faded with age, ink has gone through to other side of paper in places; creased from folding; hole through center of both pages; tape used to attempt to mend tears and holes. (3) 1796 Small Handwritten bank note dated February 5, 1796. Writing on one side only. "Received Feb 5th 1796 of MR. ANTHONY C. (MARNIS ?) four pounds two shillings and six pence in full for [illegible]." Signed by WILLIAM & JOS (JOSEPH) GRAY. Paper in GOOD CONDITION, creased along edges and corners. (4) 1764 Half-page Handwritten bank note dated July 21, 1764. Writing on one side only. "Received of MR. WILLIAM JONES July 21st, 1764 by the hands of your Overseer the sum of three pounds two shillings on Account". Signed by JOHN SAYRE & COMPANY. Paper in FAIR CONDITION, yellowed with age; crease marks from folding; holes along creases; paper loss along right edge; tape repairs on blank backside.(5) 1737 Half-page probably from a banking book, dated 1737 in the top left corner. Writing mostly on one side, a column of numbers on backside. Handwritten page is presumably from a banking ledger, recording amounts and transactions. Nice list of Colonial American Names. List of names with sums: JOHN GRIFFEY, MATTHIAS CARTE, PETTER PETERSON, JOHN (RANSON?), THOMAS CLAYTON, JOSEPH GRIST, GEORGE GRIST, JOHN (RAILIE?) Paper in POOR CONDITION, yellowed and darkened with age; creased from folding; discoloration; tape used to mend tears, tape has discolored paper. (6) Undated Half-page probably from a banking ledger, no date. Writing on one side only. "DR. MATHEW JONES, ESQ. in (acct?) with RICH. (RICHARD) LLOYD. Ledger contains dates and transaction details. Paper in FAIR CONDITION, discolored with age; creased from folding. (7) 1787 Handwritten banking memo dated May 10, 1787. Writing on both sides. "Balance Due WILLIAM JONES."; "Settled this 10th day of May 1787 By us - WILLIAM JONES, DANIEL (BURCHALL?)". Paper in POOR CONDITION, faded with age; heavy creases from folding; clear (now darkened) tape used to reinforce creases. (8) 1787 Handwritten bank note dated March 12, 1787. Writing on both sides. "Received of WILLIAM JONES the sum of seven pounds being the fees & expense in full for surveying two tracts of land one on STONEY CREEK and the other in MILLFORD (MILFORD) TOWNSHIP". Signed by GEORGE WOODS. There is a written note on the backside that mentions a DR. WILLIAM H. DELANY and a (DR.?) TOBIN. Paper in FAIR CONDITION, yellowed with age; creased from folding; tape used to mend tears. (9) 1796 Handwritten large-page ledger document--dated 1796. Bookseller Inventory # 000053