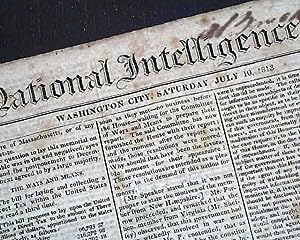 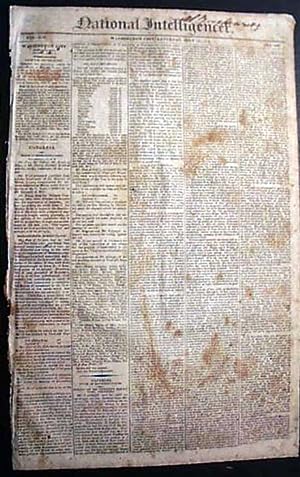 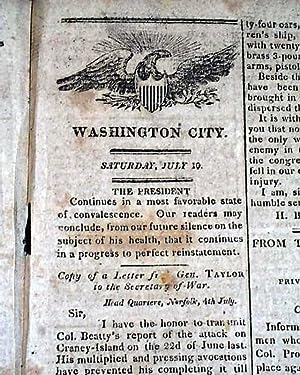 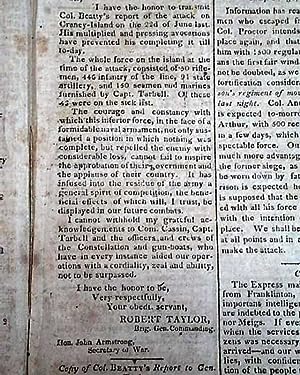 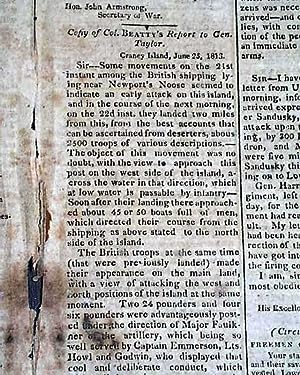 Quantity Available: 1
View all  copies of this book
Buy Used
Price: US$ 86.00 Convert Currency
Shipping: US$ 25.00 From Canada to U.S.A. Destination, rates & speeds
Add to basket

National Intelligencer, Washington D.C., July 10, 1813 War of 1812 Battle of Craney Island Page 3 has a letter from Gen. Robert Taylor to the Sec. of War forwarding a letter from Lt. Col. Beatty about the attack by the British on Craney Island, signed in type: Robert Taylor. Hereafter is Lt. Col. Beatty's report about the attack and defeat of the enemy, signed in type: H. Beatty. Other related reports. Small hole in the first leaf, some foxing and little margin wear, otherwise good. During the War of 1812, U.S. defensive emplacements on Craney Island had a seven-gun fortification and was manned by 580 Regulars and militia in addition to 150 sailors and marines from the USS Constellation. On June 22, 1813, the Battle of Craney Island took place. 81 British troops were killed of their 1300 total, with no American losses of the 730 man force. The victory at Craney Island saved Norfolk and Portsmouth from being captured and pillaged by the enemy. On the morning of June 22, 1813, a British landing party of 700 Royal Marines and soldiers of the 102nd Regiment along with a company of Independent Foreigners came ashore at Hoffler's Creek near the mouth of the Nansemond River to the west of Craney Island. When the British landed, the defenders realized they were not flying a flag and quickly raised an American flag over the breastworks. The defenders fired, and the attackers began to fall back, realizing that they could not ford the water between the mainland and the island (the Thoroughfare) under such fire. British barges manned by sailors, Royal Marines, and the other company of Independent Foreigners then attempted to attack the eastern side of the island. Defending this portion was a company of light artillery under the command of Captain Arthur Emmerson. Emmerson ordered his gunners to hold their fire until the British were in range. Once they opened fire, the British attackers were driven off, with some barges destroyed, and they retreated back to the ships. (Wikipedia). Bookseller Inventory # 2859


We guarantee the condition of every book as it's described on the Abebooks web sites. If you're dissatisfied with your purchase (Incorrect Book/Not as Described/Damaged) or if the order hasn't arrived, you're eligible for a refund within 30 days of the estimated delivery date. If you've changed your mind about a book that you've ordered, please use the Ask bookseller a question link to contact us and we'll respond within 2 business days.
Lord Durham Rare Books, PH9 - 7 Gale Cres., Ontario, L2R 7...


All CANADIAN ORDERS (shipments) EXTRA COSTS. TO THE RETAIL PRICE LISTED ON ABE, ADD H.S.T. (vary by province) for maps, prints, ephemera and manuscripts. Used books are PST exempt, and only 5% HST is ADDED for used books and 13% HST for all non-books (maps, manuscripts, photos, ephemera, etc) when shipped to a Canadian address.
All OUTSIDE OF CANADA ORDERS (shipments) EXTRA COSTS. There are extra cost for Customs Clearance (ie: US Customs Brokerage) and Government Taxes (ie: UK VAT tax) which are the responsibility of the buyer and to be determined on each international (outside of Canada) order.
Stated shipping costs are for packed books weighing .5-1.0 kg, that is, 1.1-2.2 lbs. We ship world-wide & securely wrap and pack all books. INSURANCE on purchases over $100 will be applied: $1 per $100. There is no handling fee and shipping is at cost.
If your book order is heavy or oversized, we may contact you to indicate the EXTRA COST to deliver your order.
Credit cards accepted through the ABE e-commerce system.
Wire Transfer, Money Order or Cash. Postage at cost.
We are always interested in purchasing books, maps, prints, manuscripts and photographs in our area of specialty.
Items offered are subject to prior sale.