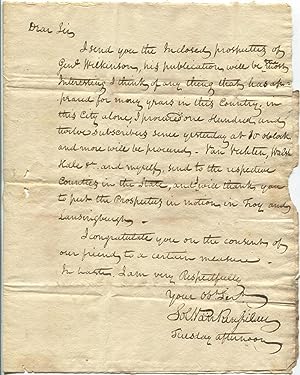 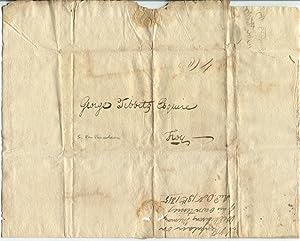 This letter, written in October of 1815 to Solomon Van Rensselaer's friend and colleague, George Tibbits, describes General James Wilkinson's "Memoirs of My Own Times" as "the most interesting [publication] I think of any thing that has appeared for many years in this country." Van Rensselaer was helping promote the book around New York State and proudly claimed "In this City alone I procured one hundred and twelve subscribers since yesterday at 10 o'clock, and more will be procured." He hoped Tibbits would "put the prospectus in motion in Troy and Lansingburgh." Van Rensselaer signed boldly and with a bit of flourish after closing "I am very respectfully your obedient servant." Written in Van Rensselaer's bold, clear hand on one page of a full sheet of paper measuring approximately 10 1/2" x 16 1/2", folded in half to create an integral address leaf. The letter was docketed near the seal. Solomon Van Vechten Van Rensselaer (1774-1852) was an officer in the US Army and Congressman from New York prior to becoming Postmaster of the City of Albany. George Tibbits (1763-1849) was a politician at both the State and national levels, in addition to his business ventures in Troy, New York, the city where he was also mayor for several years. James Wilkinson (1757-1825) was an American military man and statesman, but was involved in a number of scandals over the years. After his death, there was a final scandal when it was revealed that he had been a paid agent for the Spanish Crown. Condition: There are several creased fold lines and some light toning and soil, as well as a small amount of paper loss and staining near where the seal was placed. There is a larger (approximately 2" x 2 1/2") area of paper loss from the blank margin of the page with the address panel. None of the loss affects the text of the letter or the signature, and it would display quite nicely. Bookseller Inventory # A00516