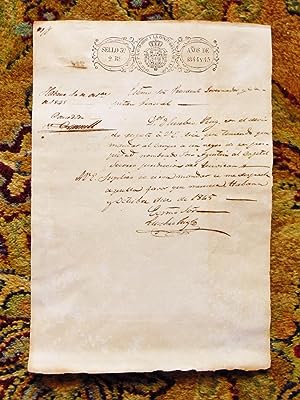 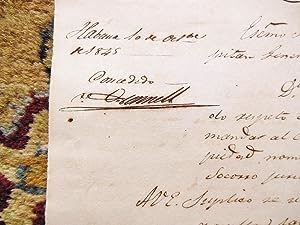 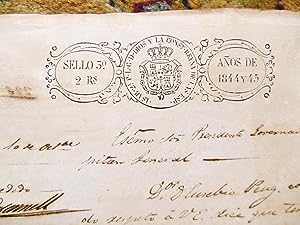 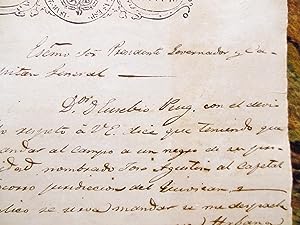 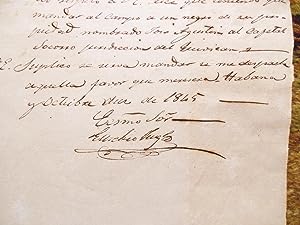 1845 Handwritten Document with Official Stamps. The document grants freedom of travel within Cuba to a Black Slave. SIGNED by LEOPOLDO O'DONNELL "PRESIDENTE GOVERNATOR Y CAPITAN GENERAL." An unusual document, because General Leopoldo O'Donnel is mostly remembered for his ordering the roundup, torture, and massacre of thousands of slaves in 1844, a year that became known as "The Year of the Lash". Handwritten on a single sheet of watermarked paper, 8.5x12", written on one side only though the ink shows through to the backside. GOOD condition. Leopoldo O'Donnel underlined his signature very firmly which caused a thin ear along the underlining. The paper has toned with age. Overall still solid with writing and stamps that are bright and clear. About LEOPOLDO O'DONNELL (excerpted from Wikipedia): ******Don Leopoldo O'Donnell y Jorris, 1st Duke of Tetuan, 1st Count of Lucena, 1st Viscount of Aliaga, Grandee of Spain, (Spanish: Leopoldo O'Donnell y Jorris, I duque de Tetuán, I conde de Lucena, I vizconde de Aliaga, grande de España) (12 January 1809 - 5 November 1867), was a Spanish general and statesman. He was of Irish paternal descent, a descendant of Calvagh O'Donnell, Rí of Tyrconnell. He was born at Santa Cruz de Tenerife a son of Carlos O'Donnell y Anethan (born 1768) and wife Josefa Jorris y Casaviella, and paternal grandson of José O'Donnell y O'Donnell and wife Marie Anne d'Anethan. He had an uncle Francisco and an aunt Beatriz, married to Manuel Pombo y Ante (1769-1829), and had issue. O'Donnell was a strong supporter of the Cristinos, and backed the regency of Maria Cristina in the 1830s. When General Baldomero Espartero seized power in 1840, O'Donnell went into exile with Maria Cristina, and was involved in an attempted coup against Espartero in 1841. O'Donnell was soon back in power and was sent to Cuba as Captain General in October 1843. He is credited with the massacre of 1844 known as the repression of La Escalera. Thousands of slaves and "free-coloured" people in Cuba ended up in dark dungeons, were tortured and executed in what became known as the 'year of the lash'.******. Bookseller Inventory # 000571