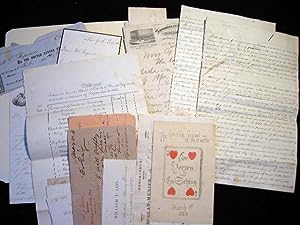 C. 1864-1895 Collection of Handwritten & Printed Ephemera Relating to the Career of Doctor John Francis Gignoux of New York & New Jersey and his Family.

About 35 pieces of ephemeral material relating to the education, medical career, family life of this physician; including: a Matriculation Ticket for the University of the State of New York College of Physicians and Surgeons, for 185(5) Gordon Buck, M.D. Registrar-the back of card with penciled details regarding the conference of the degree of Doc. of Medicine for J.F. Gignoux, dating it for 1865; slightly puzzling, since the next two items, one, a letter on New York State Soldiers Depot letterhead with patriotic vignette dated 1864 and addressed to Maj. G.E. Baldwin, U.S. Army the sender is regarding recommending Dr. Gignoux for a placement ".as a suitable member of the Medical Commission to look after the interests of the Soldiers of the State of New York." - this was at the behest of Dr. Cummings and is signed by E. Lee Jones Surgeon N.Y.S.S. Depot, accompanied by the 2-page note sent to Dr. Gignoux which talks of this situation, and its renumeration ".it is a military Depot (and) will occupy only a little while each day and compensation $ 5. a day.", this sent by M.E. Macdowall - by which we infer that Gignoux is already a physician by the 'matriculation' card's dating - it is not clear whether he took the position at the Army's Depot; with a 12-page (legal size) handwritten paper, apparently by the doctor, regarding the history and current research on gastric problems, including diagnosis and treatment, symptoms, description of ailments with references to the history of various research, gastritis toxica, more - with some corrections to the verbiage, probably an independently-researched paper written for his examinations at medical school - his prefatory remarks state ".Without having the pretention of offering something new the present treatise presents a careful selection from the best modern minds on the subject.which remark will I trust entitle me to the kind consideration of a critical reader." - a well-written paper, without a conclusion or final leaf; Dr. David Magie (of Princeton, N.J.) requests on the back of his business card that Gignoux take his shift for him at the "1st Surg. Div."; in the 1870s, a printed receipt from the United States Express Co. and a 1877 printed invitation ".to institute a new chapter of the Alpha Delta Phi .resident in New York and vicinity." the annual dinner was to be held at Delmonico's and is signed in print by John Jay, Joseph H. Choate, David W. Judd, Theo. W. Dwight, Russell Sturgis, Jr. and other members of the fraternity; 1880s: A program or flyer for a humorous school theatrical of The Comstock School 32 West 40th St. (N.Y.) in 1888 with a cover design of a 4 of hearts playing card, the hearts hand-colored and entitled "Vier Herzen und Ein Schlag" having funny illustrative 'advertisements' - for hair growth, whiskey, 'Bear's' Soap & more, listing the 4 players; at this time of his career Dr. Gignoux seems to have shifted focus from being a practicing physician (or added the practice of) an apothecary - there are receipts from David Hays & Sons requesting "Mary Stuart Extract" and from Chocolat-Menier, A.J. Ditman Pharmacist (2 from this establishment one of which has an advert. on back for Ditman's Truss Annex & publicizes their products), F. Ehrmann's Pharmacies, William T. Lins German Pharmacy (complaining about not receiving an order), Francis J. Zitz, Pharmacist, Franklin B. Crouch Drugs and Medicines (2 requests), W.H. Whitney Pharmacist - all with their imprinted cards or forms and requesting various pharmaceutical substances; also here is a 4-page (legal size) group of material, probably from a press-copy, printed black and in a very precise script of "Amounts due the Heirs of Estate of Claude Gignoux, deceased, in division of September 11, 1885" with summary, accounts to heirs and a schedule of payments sheet - several Gignoux family members are named and also their co-family members Adele and Elise Matthiessen (relations of the 20th century explorer and writer Peter M. Bookseller Inventory # 21360

We are active buyers, sellers and appraisers of antiquarian, scholarly, literary and historical materials including books, documents, photographs, manuscripts and collections and archives of varied interest. We are members in good standing of the Antiquarian Booksellers Association of America (ABAA), the International League of Antiquarian Booksellers (ILAB), the Ephemera Society of America, the Bibliographical Society and Manuscript Society. We are happy to correspond via email or phone.


Types of payment welcomed: Please use the abebooks.com credit card system or use PayPal for all credit cards. We will also accept your check or money order, as long as it is drawn on U.S. funds in a U.S. bank; for wire transfers please confer with us first. New York State residents please add appropriate sales tax. If item is not as described, return within 10 days for refund. Thank You! George Krzyminski, at Certain Books.


U.S. Domestic Shipping is $6 first book, $1 each book thereafter. International orders figured individually. Shipping costs are based on books weighing 2.2 LB, or 1 KG. If your book order is heavy or oversized, we may contact you to let you know extra shipping is required.