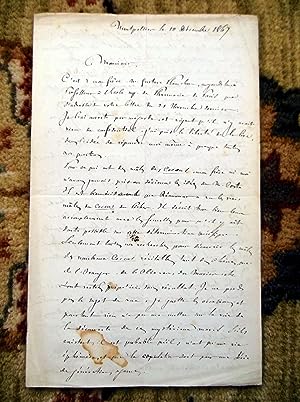 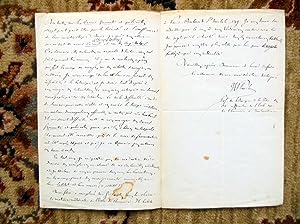 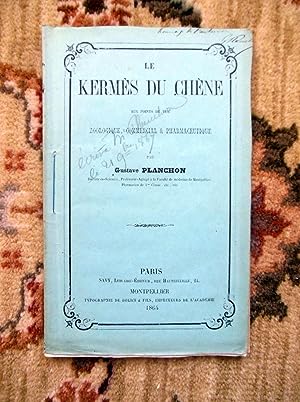 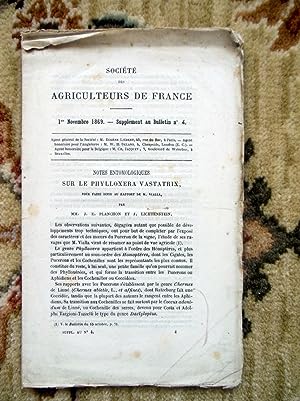 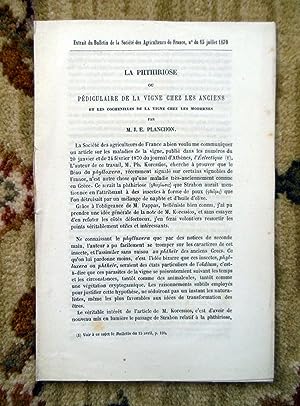 1867 JULES-EMILE PLANCHON HANDWRITTEN LETTER to DR. V.A. SIGNORET, plus two of J.-E. Planchon's ORIGINAL WORKS on the FRENCH PHYLLOXERA VINEYARD PLAGUE, plus a SIGNED WORK by J.-E. Planchon's brother, GUSTAVE PLANCHON. THREE PAGE HANDWRITTEN LETTER by JULES EMILE PLANCHON to DR. VINCENT ANTOINE SIGNORET (addressed to "Monsieur", but clearly to Dr. Vincent Antoine Signoret, identified by the other included items that are described below). The letter is on a single-fold sheet, making 4-pages. Handwritten on the front page and the two inside pages, the back page is blank. Signed by J. E. Planchon at the end of his letter, with his current positions as Professor and Director of Pharmaceuticals in Montpellier, written beneath his signature. AN IMPORTANT LETTER - Written during the time J-E PLANCHON was investigating the cause of the destruction of grape vines throughout Europe. Much of the letter discusses botany, with botanical words such as: Chènes, Coccus, Gramutii, Pulvinatus, Chermes, Cultivés, Coquilles, Èspece, etc. Much of the letter has to do with scale insects, a specialty of the letter's recipient, DR. V.-A. SIGNORET. The letter is dated: Montpellier le 10 Decembre 1867. It appears that the letter was originally sent to GUSTAVE PLANCHON, the brother of JULES EMILE PLANCHON, in response to a booklet written by Gustave Planchon titled: LE KERMES DU CHENE - AUX POINTS DE VUE ZOOLOGIQUE, COMMERCIAL & PHARMACEUTIQUE. But the letter by Signoret to Gustave Planchon was either intercepted by or forwarded to Jules Emile Planchon, who read it and responded to it. THE LETTER IN THIS AUCTION IS THE LETTER BY J.-E. PLANCHON to SIGNORET, it DOES NOT include the assumed letter written by Signoret to Gustave. However. GUSTAVE'S BOOKLET IS INCLUDED. The booklet has printed blue wrappers, sewn binding, 5.25x8.25", 47 pages. Published in PARIS and MONTPELLIER, 1864. The booklet is SIGNED and INSCRIBED by GUSTAVE PLANCHON at the top of the front cover: "hommage de l'auteur / Gustave Planchon (signed)". The booklet has the ink-stamped signature of SIGNORET on the half-title page, again on page 7 (the beginning of the text), and a third time on the blank bottom of the last page (page 47). Handwritten on the front cover, presumably by SIGNORET is "ecrit à M. Planchon le 21 Nbre 1867". This corresponds nicely with the December 10, 1867, date on the letter by E.-J. Planchon to (presumably) Signoret. The booklet also has a handwritten, single-line, relevant note on page 23, presumably by Signoret. ALSO INCLUDED are TWO BOOKLETS on GRAPE VINES and VINEYARDS by J. E. PLANCHON. (1) An 8 page booklet titled "LA PHTHIRIOSE ou PEDICULAIRE DE LA VIGNE CHEZ LES ANCIENS - Et Les Cochenilles de la VIGNE Chez Les Modernes". A separately bound extract from the Societe des Agriculteurs de France, 1870. (2) A 16 page booklet titled "NOTES ENTOMOLOGIQUES SUR LE PHYLLOXERA VASTATRIX". A separately bound extract from the Societe des Agriculteurs de France, 1869. IN SUMMARY, THIS AUCTION IS FOR: (1) A 3-PAGE HANDWRITTEN LETTER BY JULES-EMILE PLANCHON. (2) A 42 PAGE Booklet by GUSTAVE PLANCHON, SIGNED by GUSTAVE PLANCHON, and owned by VINCENT ANTOINE SIGNORET, with his stamped Signature and Handwritten notes. (3) AN 8 PAGE Booklet by JULES EMILE PLANCHON on VINES both Ancient and Modern. (4) A 16 PAGE Booklet by JULES EMILE PLANCHON on PHYLLOXERA, the Plague that was destroying the Vineyards of France and Europe. CONDITION: The letter is solid, there are some stains, spots, creases and edge toning but the writing is clear throughout. The letter has a number of folds from where it was folded, presumably to fit into a small envelope. The booklet by Gustave Planchon has a couple of creases and spots, but remains solid and nice. The 8 page booklet has some creases but remains sturdy, bright and clean. The 16 page booklet is soiled, has edge wear, creases, and tears, has some foxing, and has some early previous owner's margin marks and text underlining. Bookseller Inventory # 000401