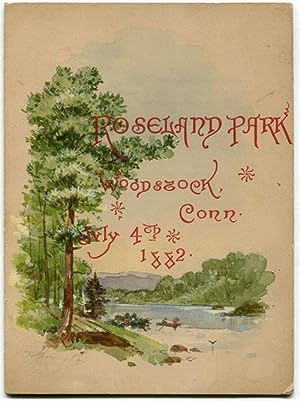 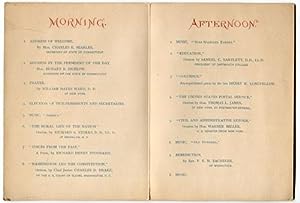 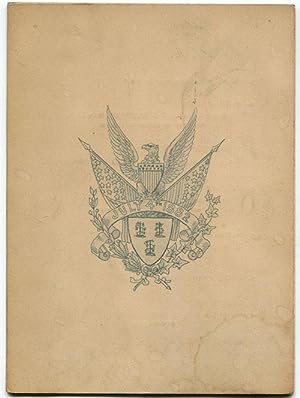 A beautiful program for the July 4th celebration held at Henry C. Bowen's Roseland Park in 1882. Illustrated with a watercolor enhanced engraving of an idyllic scene that is most likely the lake at Roseland Park, the program lists prayers, addresses, orations, music, and poetry by prominent Americans including an unpublished poem by the late Henry Wadsworth Longfellow. Four-page, stiff card stock, 6 1/2" x 4 3/4". Written in pencil on the front, beneath the tree, is the word Tiffany followed by a letter or two that we cannot decipher. Whether the design of the program was by Tiffany or the program belonged to a Tiffany, we do not know. Condition: Program lightly soiled, some stains on back page, corners bumped, otherwise very good. Roseland Park was the summer home built by wealthy businessman Henry C. Bowen. On December 25, 1865, Bowen married his second wife, Ellen Holt. Roseland Cottage experienced a rejuvenation following their marriage, and Henry Bowen subsequently became well-known for reviving the celebration of the Fourth of July as a patriotic holiday. These celebrations attracted as many as 10,000 people who heard speeches, saw fireworks, and drank pink lemonade. Bowen, often called "Mr. Fourth of July," was an important benefactor of the town of Woodstock and gave Roseland Park, which included a man-made lake, to the community. Prominent visitors included Ulysses S. Grant, Henry Ward Beecher and John C. Fremont. Bookseller Inventory # AM00067

Dennis Holzman Antiques is located at 111 Remsen St., Cohoes, New York. In addition to antiques, manuscripts, fine art and collectibles, we sell used, rare, and out-of-print books both in our store and on-line. We pack carefully and ship promptly. Our telephone number is: 518 326-2061 (Monday - Friday, 11-5 Eastern time; Saturdays 11-3 Eastern Time); our e-mail is: info@holzmanantiques.com.

Canadian buyers take note: If you are paying with a money order, the money order
must be from a U.S. bank, in U.S. dollars. We apologize for any inconvenience,
but we cannot afford to absorb the charge levied by our bank for deposits not
meeting these criteria.


Orders usually ship within 2 business days. Shipping costs are based on books weighing 2.2 LB, or 1 KG. If your book order is heavy or oversized, we may contact you to let you know extra shipping is required.

We take pride in excellent packing and prompt shipping. We e-mail you when we have mailed your book, and we use delivery confirmation through the USPS. We insure all books over $50.