Items related to 1898: The Birth of the American Century 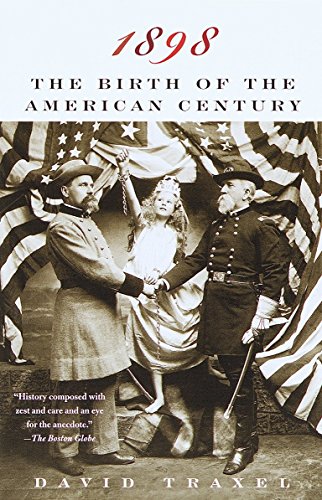 1898: The Birth of the American Century

Title: 1898: The Birth of the American Century

In 1898: The Birth of the American Century, David Traxel tells the story of a watershed year, a year of foreign conflict, extravagant adventure, and breakneck social change that forged a new America—a sudden empire with many far-flung possessions, a dynamic new player upon the global stage.

At the heart of this vivid, anecdotal history is a masterly account of the Spanish-American War, the "splendid little war" that garnered the nation Guam, Puerto Rico, and the Philippines.  From the sinking of the Maine in waters off Havana to Teddy Roosevelt's rough riders and the triumph of Admiral Dewey, here is the lightning-swift military episode that transformed America into a world power. Here too are many stories not so often told—the bloody first successes of the new United Mine Workers, the tentative beginnings of the Ford Motor Company, the million-dollar launch of the Uneeda Biscuit—each in its way as important as the harbinger of the American century.  Compulsively readable, frequently humorous, utterly fascinating in its every detail, 1898 is popular history at its finest.

The 20th century may have begun in the year 1901, but the "American Century" actually began three years earlier, according to historian David Traxel, who pinpoints 1898 as the pivotal year for America's new found presence on the world stage. In his book 1898: The Birth of the American Century, Traxel combines scholarly knowledge with eloquent storytelling to chronicle the events of this crucial year that set in train the transformation of the United States from a 19th-century isolated agrarian society, into a leading world power both economically and politically.

Traxel views the Spanish-American War as the epicenter of events in 1898--a war which the States won in a matter of months, though the Europeans never quite managed to defeat Spain even after several centuries of warfare. With this victory, the U.S. was now firmly established as a major military player. Economically the United States was also getting richer due to increased trade with foreign markets and because of a new generation of innovative industrialists like Ford and Westinghouse. The word "marketing" also entered the American business vocabulary, and 1898 saw the first million-dollar advertising campaign--to launch a well-known biscuit! Traxel goes on to detail how America's workforce was changing--unions fought for the rights of workers, and women pursued jobs and the right to vote. Although the United States didn't suddenly metamorphose overnight, 1898 was certainly a crucial year in its development, and Traxel recounts these events in meticulous detail. --Naomi Gesinger