Items related to 1898. The Birth of the American Century 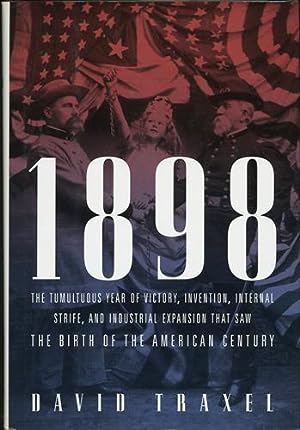 1898. The Birth of the American Century

Title: 1898. The Birth of the American Century

In this remarkable evocation of the American past, David Traxel chronicles the extraordinary events of 1898--a year without rival in United States history for its extravagant adventure and far-reaching significance. Displaying a rare combination of graceful writing and authoritative scholarship, 1898 examines the lives of politicians and homemakers, outlaws and reformers, in telling the story of America's metamorphosis from a rural, isolationist society into a commanding presence on the world stage.

Traxel's account centers upon his vivid portrayal of America's first foray into international military affairs, the Spanish-American War. Spurred on by the yellow journalism of Joseph Pulitzer and William Randolph Hearst, the United States entered a war that garnered the nation Puerto Rico and the Philippines, and initiated the ascension of a little-known assistant secretary of the navy, Theodore Roosevelt. But while the Rough Riders were capturing the nation's attention abroad, bloody battles were occurring within the nation's own borders. Coal workers and company guards fought in Illinois, while racial conflict led to bloodshed in North Carolina, and in Minnesota the last battle between Native Americans and the U.S. Army resulted in the defeat of government troops. Radical advances in technology led to less violent but equally important changes, as the production of the first gasoline-powered car heralded a new era, and the first million-dollar advertising campaign (for Uneeda Biscuits) revealed the growing importance of marketing for a country in the midst of urbanization.

Twelve months of confusion, contradiction, and crisis constituted this watershed year, and David Traxel has woven together these disparate strands into a rich tapestry of political unrest, domestic upheaval, and social change. An important contribution to the nation's cultural history, 1898 is a fascinating account of the definitive year that foretold the American Century.

The 20th century may have begun in the year 1901, but the "American Century" actually began three years earlier, according to historian David Traxel, who pinpoints 1898 as the pivotal year for America's new found presence on the world stage. In his book 1898: The Birth of the American Century, Traxel combines scholarly knowledge with eloquent storytelling to chronicle the events of this crucial year that set in train the transformation of the United States from a 19th-century isolated agrarian society, into a leading world power both economically and politically.

Traxel views the Spanish-American War as the epicenter of events in 1898--a war which the States won in a matter of months, though the Europeans never quite managed to defeat Spain even after several centuries of warfare. With this victory, the U.S. was now firmly established as a major military player. Economically the United States was also getting richer due to increased trade with foreign markets and because of a new generation of innovative industrialists like Ford and Westinghouse. The word "marketing" also entered the American business vocabulary, and 1898 saw the first million-dollar advertising campaign--to launch a well-known biscuit! Traxel goes on to detail how America's workforce was changing--unions fought for the rights of workers, and women pursued jobs and the right to vote. Although the United States didn't suddenly metamorphose overnight, 1898 was certainly a crucial year in its development, and Traxel recounts these events in meticulous detail. --Naomi Gesinger

Libraries and Institutions can be billed according to their needs.


Orders usually ship within 1 business day. Shipping costs are based on books weighing 2.0 LB, or a bit less than 1 KG. If your book order is heavy, oversized, or a set we may contact you to let you know extra shipping is required. PLEASE NOTE THAT SURFACE MAIL IS NO LONGER AVAILABLE ON INTERNATIONAL ORDERS from the U.S. Standard rate is now airmail (good up until 4 lbs). Many, though not all books, can fit boxed in a U.S. flat rate Priority envelope and can be shipped for $26.95 International ($22.95 Canada). We will automatically use this method if possible for orders less than $100 and will reduce your charges accordingly. All items are shipped boxed. All items are insured.