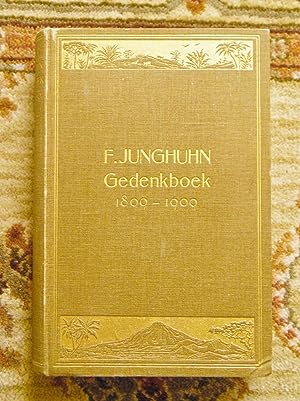 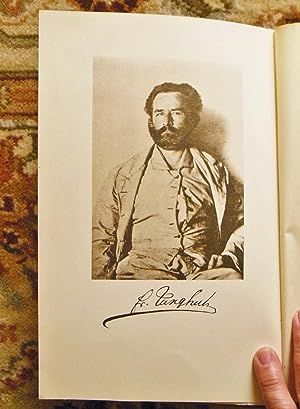 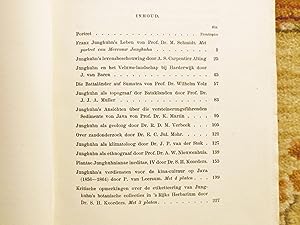 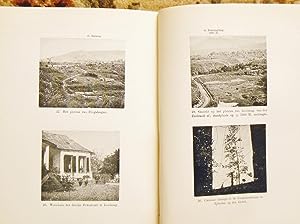 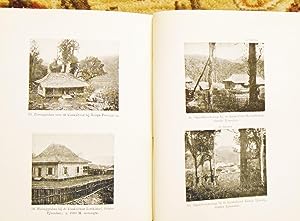 FRANZ JUNGHUHN : GEDENKBOEK (Festschrift) 1809-1909. A Book of Tributes and Remembrances by Junghuhn's Colleagues and Friends, published to celebrate the 100th anniversary of Junghuhn's birth. Includes a chronological biography of Junghuhn's life. F. JUNGHUHN, 1809-1864, was a noted Dutch / German Botanist and Geographer, known especially for his works on the botany and geography of Java. Published by Martinus Nijhoff, S-GRAVENHAGE (THE HAGUE), The Netherlands, 1910. First Edition. TEXT in DUTCH. Hardcover Book, cloth covered boards, embossed gilt decorations on the front cover show scenes of Java including one of its volcanos, gilt titling to the front cover and spine, top page edges stained green, front and bottom deckled page edges, dark green endpapers, 6.5x9.5", x + 361 pages, plus unnumbered pages of plates. Illustrated with 17 plates, 2 portraits including frontispiece, 2 facsimiles (1 folded). Contents (by various Dutch scholars, in Dutch as taken from the book): Franz Junghuhn's Leben. Junghuhn's levensbeschouwing. Junghuhn en het Veluwe-landschap bij Harderwijk. Die Battalander auf Sumatra. Junghuhn als topograaf der Bataklanden. Junghuhn's Ansichten uber die versteinerungsfuhrenden Sedimente von Java. Junghuhn als geoloog. Over zandonderzoek. Junghuhn als klimatoloog. Junghuhn als ethnograaf. Plantae Junghuhnianae ineditae, IV. Junghuhn's verdiensten voor de kina-cultuur op Java (1856-1864). Round embossed blind stamp of OAKES AMES LIBRARY OF SCIENCE on the title page, but NO other library markings. VERY GOOD condition: The covers are rubbed at their edges and folds, the front bottom corner is bumped, and the spine gilt is slightly faded, but overall the covers are and the front cover gilt designs are brilliant; internally the pages are tight, bright, clean and unmarked. A solid, lovely copy. About FRANZ WILHELM JUNGHUHN (from Wikipedia): ******Friedrich Franz Wilhelm Junghuhn (1809-1864), was a German-Dutch Botanist and Geologist. Junghuhn settled on Java, where he made an extensive study of the land and its people. He discovered the Kawah Putih crater lake south of Bandung in 1837. He published extensively on his many adventurous expeditions and his scientific analyses. Among his works is an important description and natural history in many volumes of the volcanoes of Java, BIJDRAGEN TOT DE GESCHIEDENIS DER VULKANEN IN DEN INDISCHEN ARCHIPEL (1843). He completed DIE TOPOGRAPHISCHEN UND NATURWISSENSCHAFTLICHEN REISEN DURCH JAVA (TOPOGRAPHIC AND SCIENTIFIC JOURNEYS IN JAVA) in 1845 and a first anthropological and topographical study of Sumatra, DIE BÄTTALANDER AUF SUMATRA (BATAK LANDS OF SUMATRA). in 1847. In 1849, ill health forced his return to the Netherlands, where he married Johanna Louisa Frederika Koch on January 23, 1850, and had a son. While in the Netherlands, Junghuhn began work on a four volume treatise published in Dutch and translated into German between 1850 and 1854: JAVA, DESZELFS GEDAANTE, BEKLEEDING EN INWENDIGE STRUKTUUR (in German: JAVA, SEINE GESTALT, PFLANZENDECKE, UND SEIN INNERER BAU). Junghuhn was an avid humanist and socialist. In the Netherlands he published anonymously his free thinking manifesto LICHT EN SCHADUWBEELDEN UIT DE BINNENLANDEN VAN JAVA (IMAGES OF LIGHT AND SHADOW FROM JAVA'S INTERIOR) between 1853 and 1855. The work was controversial, advocating socialism in the colonies and fiercely criticizing Christian and Islamic proselytization of the Javanese people. Junghuhn instead wrote of his preference for a form of Pandeism (pantheistic deism), contending that God was in everything, but could only be determined through reason. The work was banned in Austria and parts of Germany for its denigrations and vilifications of Christianity, but was a strong seller in the Netherlands where it was first published pseudonymously. Junghuhn returned to Java in 1855 and remained there until his death from liver disease in 1864.******. Bookseller Inventory # 000672