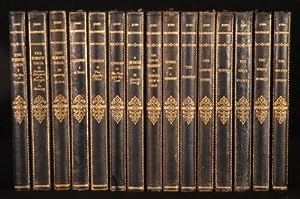 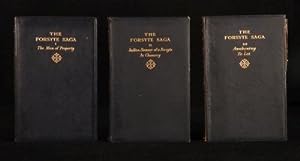 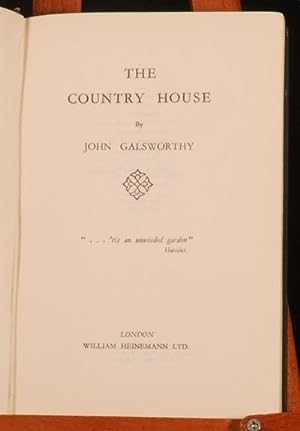 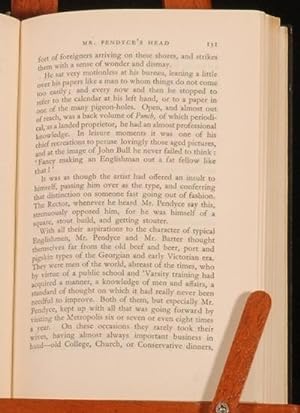 Fifteenvolumes of The Works of John Galsworthy, Grove Edition, including The Forsyte Saga. Bound in cloth with gilt lettering. Volumes 2, 4, 5, 7,and 11-21 of the Works. Includes Caravan Volumes I to III: A Stoic, The Apple Tree, and The First and the Last. The Forsyte Saga Volumes I to III: The Man of Property, Indian Summer of a Forsyte and In Chancery, and Awakening and To Let. Also: The Country House, The Patrician, The Dark Flower, Beyond, The Inn of Tranquillity and Verses New & Old, Satires and ACommentary, The White Monkey, The Silver Spoon, and A Modern Comedy Volume III: Swan Song. All volumes of The Forsyte Saga include a fold-out Forsyte family tree. There is a Times Book Club label on the rear pastedown of Satires. John Galsworthy (18671933) was a novelist and playwright, whose place in the history of English literature rests on the vast social chronicle comprising his three trilogies, The Forsyte Saga (1922), A Modern Comedy (1929) and End of the Chapter (1935). He returned to the Forsyte family in 1918 with a short story Indian Summer of a Forsyte. A chance remark by his god-daughter, Dorothy Ivens, on reading the story led to In Chancery (1920), which concludes at a clearly defined point of change with the funeral of Queen Victoria. To Let (1921), set in 1920, is placed precisely in the contemporary historical moment, and written in a more impressionist style, capturing the post-war atmosphere of restless gaiety, with its undercurrent of nihilism. The Man of Property (which became the first volume of The Forsyte Saga, but was a separate novel in itself), was widely regarded by contemporaries as confirming the end of Victorianism. It is a typically Edwardian novel in its focus on the conflict between property and art, and draws its emotional power to some degree from Galsworthy's own family relationships, particularly his affair with Ada Galsworthy. The Forsyte family represents the distinctive ideology of the English commercial upper-middle class. Its instinct of possession, its sole means of self-definition and evolution, is distilled in the portrait of the dry solicitor and art collector Soames Forsyte and his tortured relationship with his wife, Irene. Soames's obsessive love for his daughter Fleur is pursued in the second trilogy, A Modern Comedy (1929), comprising The White Monkey (1924), The Silver Spoon (1926), and Swan Song (1928). Galsworthy's fiction centres on his own social class, whose instincts and ideology he largely repudiates. He is critical of its insularity, materialism, aesthetic deficiency, chauvinism, restrictive moral codes, and imperialism. His exploration of the febrile world of 1920s society includes his treatment of the general strike, in which Fleur and her friends are caught up, and culminates with the death of Soames. Though critical interest had waned, this second trilogy was extremely popular, and Swan Song, with its greater social depth, emotional range, and narrative subtlety, is among the best of Galsworthy's writing - DNB. Condition: The bindings are tight and firm. There isslight wear to the extremities, includingslight bumping, and some slight marks to the boards. Internally the pages are bright and clean. There is some foxing to the endpapers of A Stoic and The Apple Tree. There are occasional spots on The Forsyte Saga Volume II. There is very slight browning to the endpapers of The Dark Flower. There is some slight browning and chipping to the exposed edge of the pull-out family tree in Awakening To Let. Overall the condition is very good indeed. Bookseller Inventory # 016315