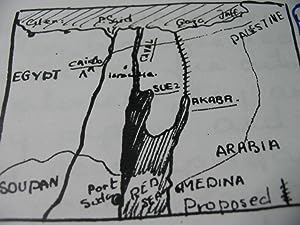 AbeBooks Seller Since May 11, 2005 Seller Rating

Evidential to the roots of Middle Eastern terror, this is the extraordinary handwritten diary of Miss Doreen M. C., daughter of General and Mrs. J. C., sister of Cynthia. This British family witnesses the very beginnings of the modern era of Middle East tensions and terrorism having been residents of Jerusalem from January 1st to mid-June of 1936. Doreen writes a significant, extraordinary, insightful and well written diary. A young girl of 16 or 17 we estimate (too young for boys - she detests them - and too old for the usual games that girls play [paraphrase]) she writes of her time spent traveling throughout British mandated Palestine recording daily her comings and goings and all that goes on around her. She also does a great job drawing maps and other illustrations. Doreen sums it up in her own hand: in a handwritten copy of a 1963 letter to the famed Leonard Mosley of the Sunday Times, found in the book Doreen admits to having in 1936 "a passion for keeping a large diary; I wrote down incidents of the strike, riots, and daily murders and ambushes like a recording angel!" She is modest. 1936 was a very intense, very interesting and very disturbing year - Mussolini advancing against the Abyssinians in Africa, Hitler on the rise in Europe, Franco tearing apart Spain, the King of England dies, Edward VIII rises and starts to fall and Palestine is in foment as the Grand Mufti of Jerusalem has made a heinous pact with Hitler and called on the arab populous to strike - politically and through armed conflict murdering British soldiers and Jewish civilians and many, many of their own people. Doreen is a "recording angel" to all this and more. From January 1st until mid-June she is for the most part based in Jerusalem, living first at the King David Hotel before moving to Talbiyeh Colony in Jerusalem. There are very few idle days; many day trips, visits, shopping and when they move residence on 'Murhurrem', Jerusalem's famed moving days, which date changes yearly, and her description of the movers and hubbub are a delightful counterpoint to the atrocities she documents. Everyday she fully details her travels around the country and the news/politics of the day - even a trip to the dentist is fraught with danger given the times. Her father was highly placed at Air Headquarters (research has found he ends his service a General and OBE recipient) with the British Air Department. He meets frequently with generals and 'big bugs' as she calls them. She even admits that he is doing the "hush-hush work". Doreen names many of the British Colony and quite frequently makes comments - Mr. Such and Mr. Other 'complete scoundrels'. Doreen is an information and current events savant. She reads the papers, listens to the radio and pumps the transient English men and women who travel throughout the Middle East and North Africa in service of Britain for the inside info and stories. [A short wave (ham) radio operator Doreen diligently records calls and conversations as she reaches out for more news.] She can quote to the day a year before when 'Mussy' promised not to go to war. Abyssinia is very important to her. The Italians, the Germans and the plight of the Jews under Hitler disturbs her to no end. Many times in her writings she makes mention, for example; PC 459 (police constable) said such and such giving her info which she then reports: "contrary to the newspaper reports" this is what really happened. She coalesced all the info and records the real story as she sees it. Here are just a very few snippets: "Mussolini is the greatest liar on earth. Hitler is number 2. Hitler is "bats" or something for he is daring to order every German Jew youth back to Germany (those who have been turned out included) for conscription." "[I] was told a few tales of storm troops that dared not to be published. They may sound a little far fetched but I do believe them as true. Poland is treating the Jews disgustingly." "I don't know what the Arabs have to grumb. Bookseller Inventory # 000125N


Books not as described are fully returnable.


Abebooks shipping costs are a guideline. Larger sized books may require more postage. An email will be sent if required.