Items related to 1947 - My Story My India Divided. 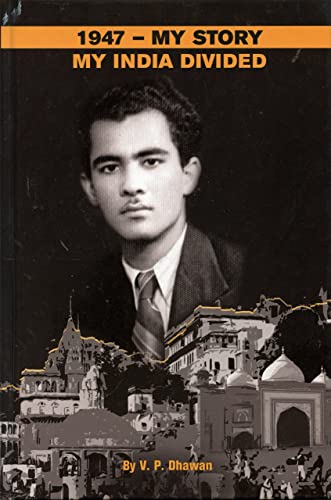 Quantity Available: 1
View all  copies of this book
Buy Used
Price: US$ 25.00 Convert Currency
Shipping: US$ 3.99 From Canada to U.S.A. Destination, rates & speeds
Add to basket

Every Indian, young and old, irrespective of religious, political or social affiliations, or bonds and obligations yearned for freedom from the yoke of foreign rule. After a long and painful struggle, freedom dawned on the subcontinent on the 15th of August, 1947, leaving in its trail a period of unimaginable killing, looting, arson, and rape. Millions were uprooted from the hearths and homes in search of new shelters. It can be called The Genocide of 1947. -- The author, Ved Prakash Dhawan, was an eyewitness to this mayhem and the spate of violent incidents that overtook the country in the wake of its newly acquired freedom. On the 5th of September, 1947, the day he was forced to leave his home in Montgomery (now Sahiwal), Pakistan, for unknown refuge in India, he wrote to his friend: "My heart aches and a chilling numbness overtakes me on the mere thought of leaving for good my birth place, my close and dear friends in Pakistan. This Great Divide is going to stay and so perhaps the seemingly deep hatred and aversion between the two communities." - This book is two stories - first the story of the author and his family during this very difficult time, and second, a history of the British rule in India and Pakistan, and the struggle for freedom. - With Montgomery Sahiwal town map, and family photographs.


Our rating system: 1. Fine; 2. Near Fine; 3. Very Good; 4. Good; 5. Fair. All books are guaranteed as described and offered subject to prior sale. Books may be returned within ten (10) days for any reason. Advance payment desired if you have not established credit with this firm. Postage and insurance are additional. We accept International Money Order and credit card payments through Paypal.