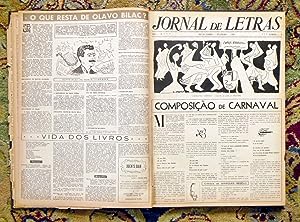 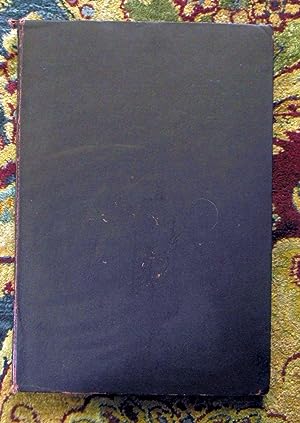 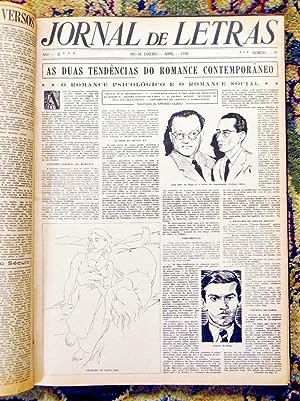 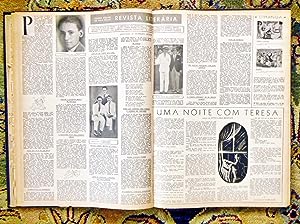 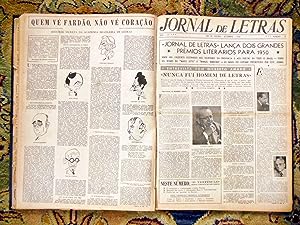 JORNAL DE LETRAS - ANO II - RIO DE JANEIRO - JANEIRO 1950 through DEZEMBRO 1950. Twelve Issues bound together in hardcovers.A HISTORICALLY IMPORTANT, BOUND COLLECTION of this BRAZILIAN LITERARY NEWSPAPER, that was also VERY POLITICAL. ARTICLES on BRAZILIAN WRITERS and POETS of the DAY, International Authors of Note, and other Arts, including Music (especially Black Jazz), Painting, and Cinema. Many of the articles became very political, as Brazilian Writers and Poets rebelled against Brazilian authority, restrictions, and right wing politics. Very large format newspapers bound together in hardcovers, black paper covered boards title written in white on the spine: "Jornal de Letras No. 7-18", 13x18.5". Monthly Brazilian Literary Newspaper, published in Rio de Janeiro. 12 issues, from January 1950 through December 1950. The newspaper issues were presumably bound by the UNIVERSITY OF CALIFORNIA, BERKELEY, because there is an Ex-Libris Stamp of the "Berkeley Library / University of California" on the front pastedown. Many (most?) of the issues seem to have 16 pages. All contain lots of Brazilian Literature and other Arts related articles, as well as Brazilian / Rio ads. CONDITION: The covers have rubs, scrapes, and pokes; the spine ends are worn; overall the covers remain sturdy and are doing their job. Internally, the pages are toned, as is normal; the pages all have wear, including chipping, to their edges; some pages have edge tears that extend an inch or two; the pages are tender especially at the edges and edge pieces can come off easily; nonetheless, the issues are in generally GOOD condition, most pages are solid (though fragile at the edges), all are legible and clean, kept that way by having been nicely bound and probably very rarely used. The issues provide a great window into the Literary Blossoming and its Political Stance in Brazil in 1950. I found the following Brazilian website that discusses the early years of JORNAL DE LETRAS, 1949-1951. The site is in PORTUGUESE. HERE IS THE TEXT AS GOOGLE TRANSLATED IT: ******Curiosities of Literature Journal 1949-1951, by: Robert Fraga, March 27, 2013. The letters newspaper was a publication. under and editing José Condé and his brothers John and Elysio Condé Condé. It was an art panomara the setting of Rio de Janeiro and also national. There, if any of you have the privilege of seeing an early JORNAL copy, may see the daily life of the artistic life of the great figures of the arts and literature. It was also a bit of artists gossip magazine, showing scenes of day-to-day city, tidbits and routines in the Brazilian Academy of Letters, opinions, artistic nitpicking related advertising. In fact, advertising is a fun aside. As I had the privilege to work researching a binding editions of the years 1949-1951, I will show some interesting tastings. Photos are taken with mobile phone and without proper lighting, so content and images are not good quality. Reading the contents of them, you will have a good idea of how the materials are fun, though, some with very high political content and activist, naturally for a publication of this type.******. Bookseller Inventory # 000448