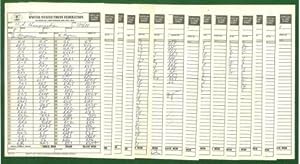 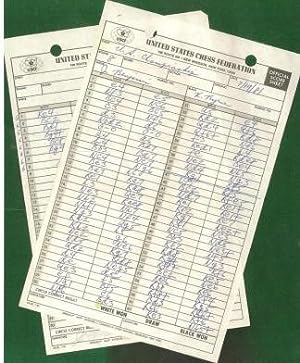 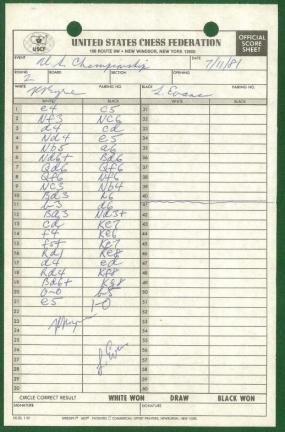 Complete set of fourteen scores sheets in Robert Byrne's hand, including the Evans game, and both the the carbon and original of the Shamkovich game. All signed except the Reshevsky score sheet. Octavo (8 1/2" x 5 1/2") The 28th U S Championship and Zonal Qualifier was a hard fought contest which ended with a tie for first place and two co-champions, Grandmasters Walter Browne and Yasser Seirawan. Since the top three finishers automatically qualify for the Zonal, a playoff between Larry Christiansen, Lubomir Kavalek and Sammy Reshevsky, who tied for third would have to be held to determine which one would join Seirawan and Browne. The event got under way on July 9 at the Americana Hotel in South Bend, Indiana. The 9th was the opening ceremonies and players meeting. The draw for pairing numbers allowed Seirawan a piece of luck, assuring him an extra White over the course of the tournament. In the first round the game were hard fought, and the only "grandmaster draw" coming from Browne. Browne decided to negotiate an early truce after consuming a great deal of time trying to crack Boris Kogan s solid opening. Sergey Kudrin, a last minute replacement for John Grefe, made his debut in the tournament an exciting one, sacrificing a piece. Sammy Reshevsky grabbed the offer and sent his King on a long hike. After time control Kudrin admitted that his attack had failed and the first decisive game was recorded. John Fedorowicz methodically turned back Leonid Shamkovich s attempt to squeeze an advantage from an English opening. Kavalek tested Lev Alburt s favorite Alekhine s Defense in the tensest struggle of the round and managed to convert an extra pair of pawns into a win. Christiansen chose a Caro-Kann against fellow Californian GM Jim Tarjan and a theoretical battle ensued. Christiansen neutralized Tarjan s slight edge with a series of characteristically aggressive moves and won after Tarjan lost the thread of the game shortly before adjournment. Evans and Lein had the best game of the round, a beautiful strategically effort by the émigré GM who displayed originality and fine control to defeat defending co-champion Larry Evans. Seirawan and Byrne played a Queen s Gambit Declined in which Robert Byrne s hurry to simplify brought him unexpected difficulties; Seirawan reached a Bishop ending and exploited his opponent s weak Kingside to win a pawn. Byrne resisted staunchly and managed to thwart all of White s winning attempts. Joel Benjamin, the youngest entrant, replaced invitee Nick deFirmian, who chose to play in Europe, and his game with Jack Peters was the longest to the round. It was a graduation of sorts for Benjamin, who would have otherwise been defending his U S Junior title. At the end of the first round Reshevsky, Kavalek, Lein, Peters and Christiansen all had one point each. Round two saw only two draws, Lein and Kogan and Christiansen and Shamkovich. This vicious and exciting session resulted in wins for Reshevsky, Kudrin, Byrne, Seirawan, Alburt and Kavalek. In one of the crispest battles, Alburt s violence paid dividends as he ran Tarjan s King around the board, picking off most of his pawns in the process. At the end of this round Reshevsky and Kavalek each had two points. Round three had a shocking development. As Fedorowicz awaited the arrival of Evans, a search by the tournament staff disclosed that Evans had checked out of the hotel! Browne bemoaned the fact that he now had two more Blacks than Whites. While Lein and Byrne, Evans first two opponents, dropped for +1 to and equal score as a result of his departure (Evans score would have to be erased since he had completed less than half his games). Later in the day Assistant TD Larry Paxton explained that the evening of the second round Evans had notified him that he was feeling ill and this was the reason he had come late for his game with Byrne. The reduction in the number of aspirants to 15 was unfortunate for the championship. In this round, one of the most i. Bookseller Inventory # C0704

We are one of the American leaders of out of print chess literature. We also specialize in anthopology, Colonial America, exploration and discovery. We deal in select literature. We consign in our area of specialty and are always interested in buying quality material from single titles to entire collections. Trade offers gladly considered. We have a large selection of rare and collectable chess literature and ephemera. We are exhibitors at both the Texas book fairs in Arlington in November and Austin in January.


All subject to prior sale, returns accepted within 10 days from posted date if not as described. Payment: Master Card/Visa/Discover/AMEX or personal check.