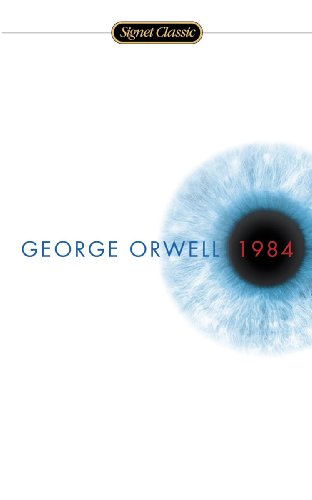 Language: English. Brand new Book. 1984 has come and gone, but George Orwell's prophetic, nightmare vision in 1949 of the world we were becoming is timelier than ever. "1984" is still the great modern classic "negative Utopia" - a startling original and haunting novel that creates an imaginary world that is completely convincing from the first sentence to the last four words. No one can deny this novel's power, its hold on the imagination of whole generations, or the power of its admonitions - a power that seems to grow, not lessen, with the passage of time. Bookseller Inventory # AAC9780881030365

Synopsis: FOR USE IN SCHOOLS AND LIBRARIES ONLY. Portrays a terrifying vision of life in the future when a totalitarian government, considered a ""Negative Utopia,"" watches over all citizens and directs all activities, becoming more powerful as time goes by.

Review: "Outside, even through the shut window pane, the world looked cold. Down in the street little eddies of wind were whirling dust and torn paper into spirals, and though the sun was shining and the sky a harsh blue, there seemed to be no color in anything except the posters that were plastered everywhere."

Book Description Econo-Clad Books, Div. of Americ, 1999. School & Library Binding. Condition: Good. A slight tan to page edges Good condition is defined as: a copy that has been read but remains in clean condition. All of the pages are intact and the cover is intact and the spine may show signs of wear. The book may have minor markings which are not specifically mentioned. Most items will be dispatched the same or the next working day. Seller Inventory # wbb0014062851

Book Description Brand: Turtleback. Condition: VERY GOOD. Pages are intact and are not marred by notes or highlighting, but may contain a neat previous owner name. The spine remains undamaged. Supplemental materials are not guaranteed with any used book purchases. Seller Inventory # 0881030368_abe_vg

Book Description Turtleback Books, 1950. Condition: Good. A+ Customer service! Satisfaction Guaranteed! Book is in Used-Good condition. Pages and cover are clean and intact. Used items may not include supplementary materials such as CDs or access codes. May show signs of minor shelf wear and contain limited notes and highlighting. Seller Inventory # 0881030368-2-4

Book Description Brand: Turtleback. Condition: GOOD. Has little wear to the cover and pages. Contains some markings such as highlighting and writing. Supplemental materials are not guaranteed with any used book purchases. Seller Inventory # 0881030368_abe_gd

Book Description Hardcover. Condition: New. Hardcover. 1984 has come and gone, but George Orwell's prophetic, nightmare vision in 1949 of the world we were becoming is timelier than ever. 1984 is still the great modern classic negative Utopia .Shipping may be from multiple locations in the US or from the UK, depending on stock availability. 328 pages. 0.280. Seller Inventory # 9780881030365