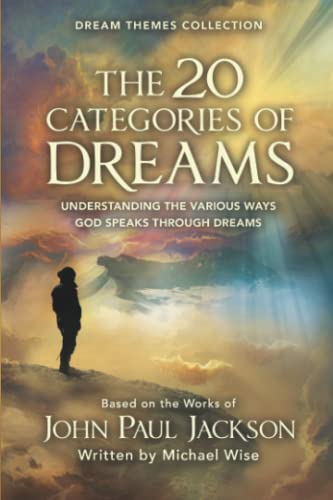 The 20 Categories of Dreams

Synopsis: What's the difference between a calling dream and a direction dream? In The 20 Categories of Dreams, you'll discover the diversity and spiritual significance of the various kinds of dreams God gives. You'll also learn to recognize the subtle differences between dark dreams, fear dreams, and false dreams, which are all given by the enemy to stop God's plan for your life. In this book, you'll gain greater understanding of the following categories and purposes of dreams: Dreams to Reach Your Destiny, Dreams to Change Your Path, Dreams for Healing and Transformation, Dark Dreams from the Enemy, and Dreams We Cause to Be Dreamed through our own souls.

About the Author: Michael Wise joined John Paul Jackson at Streams Ministries in 2007. With a background in media, Michael helped Streams Ministries transition from a focus on conferences and courses into being more media based. In addition to producing and writing content for Streams Media Network, Michael also helped John Paul create the concept and format for the Dreams and Mysteries TV program and produced its first season, going on to write nineteen episodes during the program s first three seasons in production. Michael served as vice president of operations before shifting his focus to helping John Paul develop, edit, and complete a list of unfinished manuscripts. After his passing in 2015, Michael continues the task to complete the unfinished works of John Paul Jackson and will forever be grateful for the opportunity to learn and serve John Paul and his wife, Diane. Michael and his wife, Amanda, have two children and live in the Dallas-Fort Worth area. Recognized as a minister who revealed God, awakened dreams, and led people closer to Jesus, John Paul Jackson (1950 2015) was an authority on biblical dream interpretation for over thirty years. He renewed passion in people of various faiths and age groups with his sincere explanations of the unexplained mysteries of life and enabled people to relate to God and others in fresh and meaningful ways. As an inspirational author, speaker, teacher of true spirituality, and host of the television program Dreams & Mysteries, John Paul enlightened hundreds of thousands of people across the world. He found satisfaction in his role as a youth mentor and advisor to church and national leaders, as well as in the promotion of the spiritual arts.

1. The 20 Categories of Dreams

2. The 20 Categories of Dreams

Book Description Streams Ministries, 2015. Paperback. Condition: GOOD. Has little wear to the cover and pages. Contains some markings such as highlighting and writing. Seller Inventory # 0991040929_abe_gd

3. The 20 Categories of Dreams

4. The 20 Categories of Dreams

5. The 20 Categories of Dreams

6. The 20 Categories of Dreams