Items related to 20 Lines a Day 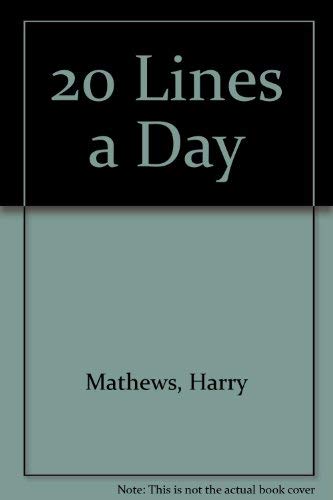 For a period of just over a year, Harry Mathews set about following Stendhal’s dictum for writers of “twenty lines a day, genius or not.” What resulted is a book that is part journal, parts writer’s manual, and part genius. First undertaken as a kind of discipline, the work molds itself into a penetrating reflection on daily events in Mathews’s life, his friends, himself, and the act of writing.

Born in New York in 1930, Harry Mathews settled in Europe in 1952 and has since then lived in Spain, Germany, Italy, and (chiefly) France. When Mathews published his first poems in 1956, he was associated with the so-called New York School of poets, with three of whom (John Ashbery, Kenneth Koch, and James Schuyler) he founded the review Locus Solus in 1961. Through his friendship with Georges Perec, he became a member of the Oulipo in 1972. The author of six novels and several collections of poetry, recent publications are THE NEW TOURISM (Sand Paper Press, 2010), Sainte Catherine, a novella written in French (Editions P.O.L, 2000), The Human Country: the Collected Short Stories (Dalkey Archive Press, 2002), The Case of the Persevering Maltese: Collected Essays (Dalkey Archive Press, 2003), OULIPO COMPENDIUM (co-edited with Alastair Brotchie; Atlas Press and Make Now Press, 2005), and My Life in CIA: A Chronicle of 1973 (Dalkey Archive Press, 2005).


We accept all major credit cards or you may send a check or Money Order.
Shipping (for a normal 2 pound book) is $3.35 for Media Mail/ $9.00 for Priority
Mail. Overseas customers -- $22.00 for International First Class Mail. $29.50
for Global Priority. All books are fully guaranteed and returnable for any (or
no) reason within 10 days of receipt. All books are the First Editions / First
Printings unless otherwise noted. Books in standard-sized dust jackets are
protected in new, clear archival co...