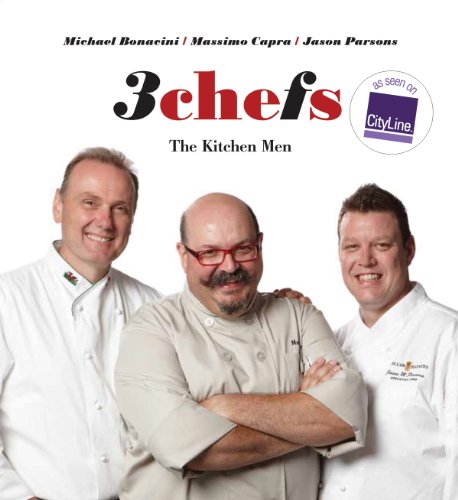 They come from three distinct corners of the world. Michael Bonacini grew up as part of an Italian family in Wales, Massimo Capra first tied on an apron in his mother’s kitchen in Cremona, and Jason Parsons got his first job in a roadhouse in Southwestern Ontario. All three have since established their reputations as imaginative and masterly cooks. And when they get together, whether in the kitchen, on TV, or at table, there is energy and excitement. Finally, these three top chefs have collaborated to produce a cookbook that accurately reflects the sense of fun and adventure that makes them such a great team.

In Three Chefs: The Kitchen Men, Michael, Massimo, and Jason combine their best recipes to create a cornucopia of tasty meals. Bursting with international inspiration, complemented with stories of growing up and learning to cook this personal collection of recipes will delight and entertain.

Cook five-star meals at home, such as

About the Author: Chef Michael Bonacini hails from South Wales where his family owned and operated several small hotels. Oliver & Bonacini Restaurants, founded in 1993, is recognized as one of Canada’s leading fine dining restaurant companies, operating 11 unique and innovative restaurants in Ontario including Bay Street’s now legendary Jump!. Michael is also a judge on the popular new television reality show MasterChef Canada, which premiered in January 2014.   Chef Massimo Capra was born in Cremona, Italy and began his culinary career in his family’s farmhouse kitchen, with his mother and father. He immigrated to Canada as a young man and is now co-owner of Mistura restaurant in Toronto where he is famous for his risottos and braised lamb ribs. He is also the author of One Pot Italian, makes regular appearances on the popular lifestyles show CityLine, and has his own television show Gourmet Escapes.   Chef Jason Parsons is originally from England, but got his start in a Southwestern Ontario roadhouse before going on to some of the best establishments in Canada and Europe. Currently head chef at Peller Estates Winery Restaurant, he has earned the Golden Plate Award from Le Clef d’Or. His restaurant is also recognized with Zagat’s highest rating for food: "Extraordinary!"   Lucy Waverman is an author, editor, columnist, and teacher who has appeared regularly on television and radio shows in Canada. She writes weekly food columns for the Globe and Mail and is the food editor of Food & Drink magazine. She lives in Toronto.

Book Description Hardcover. Condition: As New. No Jacket. Pages are clean and are not marred by notes or folds of any kind. ~ ThriftBooks: Read More, Spend Less. Seller Inventory # G1770500340I2N00

Book Description Hardcover. Condition: GOOD. Spine creases, wear to binding and pages from reading. May contain limited notes, underlining or highlighting that does affect the text. Possible ex library copy, will have the markings and stickers associated from the library. Accessories such as CD, codes, toys, may not be included. Seller Inventory # 3513376514