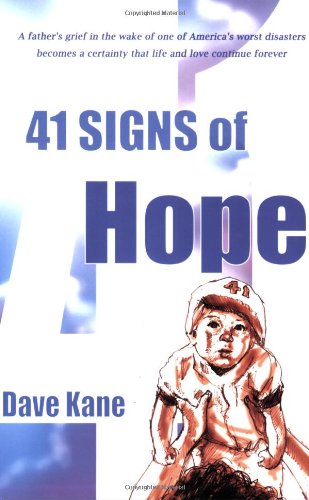 A first edition. Has minor shelf wear. Book is unread. We put tracking on every shipment. Bookseller Inventory # 42640

Synopsis: A father's grief in the wake of one of America's worst disasters, the 2003 Station Nightclub fire in Rhode Island, becomes a certainty that life and love continue forever.

About the Author: Dave Kane is a radio talk-show host in Rhode Island. He also performs as a stand-up comedian and has a one-man show called Misgivings. His other activities include running his own creative consulting company, Dave Kane Ideas. 41 Signs of Hope was inspired by the messages Dave and his family have received from his son Nicholas since his passing in the Station Nightclub fire in Rhode Island.

Book Description New River Press. Paperback. Condition: Good. A copy that has been read, but remains in clean condition. All pages are intact, and the cover is intact. The spine may show signs of wear. Pages can include limited notes and highlighting, and the copy can include previous owner inscriptions. At ThriftBooks, our motto is: Read More, Spend Less. Seller Inventory # G1891724053I3N00

Book Description New River Press. Paperback. Condition: Fair. A readable copy. All pages are intact, and the cover is intact. Pages can include considerable notes-in pen or highlighter-but the notes cannot obscure the text. At ThriftBooks, our motto is: Read More, Spend Less. Seller Inventory # G1891724053I5N00

Book Description New River Press, 2006. Condition: Good. A+ Customer service! Satisfaction Guaranteed! Book is in Used-Good condition. Pages and cover are clean and intact. Used items may not include supplementary materials such as CDs or access codes. May show signs of minor shelf wear and contain limited notes and highlighting. Seller Inventory # 1891724053-2-4