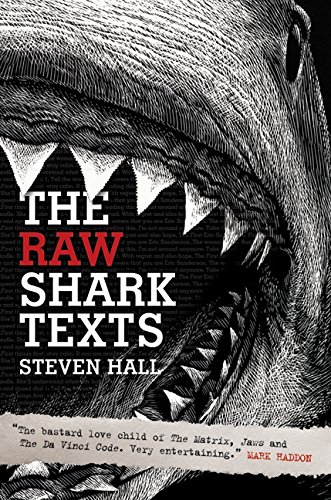 First things first, stay calm.
If you are reading this, I'm not around anymore. Take the phone and speed dial 1. Tell the woman who answers that you are Eric Sanderson. The woman is Dr. Randle. She'll understand what has happened.
With regret, and also hope,The First Eric Sanderson.

When Eric Sanderson wakes to amnesia and a haunting note from himself, he discovers an eerie world of thought and concept, a world in which ideas have a life of their own. Attacked by a force he cannot see and memories he cannot ignore―including those of a perfect love now lost―Eric discovers he is being relentlessly pursued by a shark that may exist only in his mind but which stalks him through the flows and streams of language and human interaction.Hunting the answers as he is hunted, Eric is led on a journey that will either bring the First Eric Sanderson back to life or destroy bothEric Sandersons forever.

An astounding and daring book by debut novelist Steven Hall, The Raw Shark Texts confronts readers with a fascinating puzzle aswell as an intensely absorbing story.

Review:
Amazon Best of the Month, March 2007: Not since Fight Club have a I read a book that sizzled with such fierce originality and searing vision as Steven Hall's electrifying debut novel, The Raw Shark Texts. It's a twisting, trippy thriller that tears through the landscape of language, revealing the lurking terrors uncovered in every letter of the written word. Steven Hall swims in the same surreal waters as pop-culture pioneers David Lynch and Michel Gondry, and The Raw Shark Texts deserves to be shelved somewhere between Trainspotting and Life of Pi. It pulls you under like a riptide, leaving you exhausted, exhilarated, and gasping for air.

But don't just take our word for it. We asked Audrey Niffenegger, one of the most creative contemporary writers working today, to share with readers her take on Steven Hall's debut novel, The Raw Shark Texts. Check out her exclusive Amazon guest review below. --Brad Thomas Parsons


Audrey Niffenegger is a professor in the Interdisciplinary Books Arts MFA Program at the Columbia College Chicago Center for Book and Paper Arts. A visual artist, she shows her artwork at Printworks Gallery in Chicago. The Time Traveler's Wife, her first novel, was an international bestseller and was one of Amazon.com's Best Books of 2003. It won several awards and is being made into a major motion picture. Her visual novels, The Three Incestuous Sisters and The Adventuress, were recently published by Harry N. Abrams. Miss Niffenegger is currently hard at work on her second novel, Her Fearful Symmetry, a ghost story set in London's Highgate Cemetery.

Eric Sanderson has lost his memory, his girl, his life as he once knew it. His pre-amnesiac self is sending him letters, a sort of correspondence course on how to be Eric Sanderson. Unfortunately, this previous self didn't really have it all together either. This is too bad, because the source of all the trouble is a conceptual shark, a Ludovician shark, no less. Soon Eric is on the run, trying to piece it all together and find true love before his mind gets wiped by the shark for the twelfth and probably final time.

Steven Hall is an inventive, funny and extremely smart writer. I am a letterpress printer and a typophile, and I was drawn to his book because of the typography: The Raw Shark Texts is riddled with typographic games, codes, a flip book, and a boatload of very elegant plot devices that hinge on collisions between the Information Age and the imagination. At one point Eric and Scout, his guide/love interest, are speeding away from the conceptual shark on a motorbike. Scout eludes the shark by exploding a letter bomb, a bomb made out of old metal type; the type diverts the shark into a stream of random letterforms. At this I practically fell off the couch with admiration.

There's plenty to groove on in The Raw Sharks Texts even if you're not a type maven. There's echoes of Cyberpunk, Borges, Auster; there is adventure on the high seas, lost love, an exploration of what it means to be human in the age of intelligent machines. The Raw Sharks Texts is huge fun, and I gleefully recommend it. --Audrey Niffenegger

STEVEN HALL is the author of The Raw Shark Texts and was lead writer on the bestselling video game Battlefield 1, for which he received a Writers Guild nomination. His 2007 debut novel, The Raw Shark Texts, won the Somerset Maugham Award and was shortlisted for the Arthur C. Clarke Award. It was an international bestseller and has been translated into over thirty languages. In 2013, Hall was named as one of Granta’s Best of Young British Novelists. Maxwell’s Demon is his highly-anticipated second novel.