Items related to Son of the Shadows (Sevenwaters Trilogy)

Son of the Shadows (Sevenwaters Trilogy) 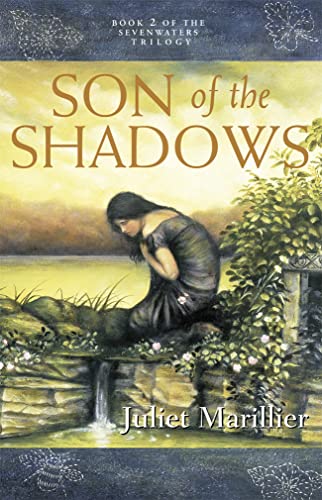 Son of the Shadows, the second book in Juliet Marillier's award-winning Sevenwaters Trilogy

Beautiful Sorcha is the courageous young woman who risked all to save her family from a wicked curse and whose love shattered generations of hate and bridged two cultures.

It is from her sacrifice that Sorcha's brothers were brought home to their ancestral fortress Sevenwaters, and her life has known much joy.

But not all the brothers were able to fully escape the spell that transformed them into swans, and it is left to Sorcha's daughter Liadan to help fulfill the destiny of the Sevenwaters clan. Beloved child and dutiful daughter, Liadan embarks on a journey that shows her just how hard-won was the peace that she has known all her life.

Liadan will need all of her courage to help save her family, for there are dark forces and ancient powers conspiring to destroy this family's peace--and their world. And she will need all of her strength to stand up to those she loves best, for in the finding of her own true love, Liadan's course may doom them all . . . or be their salvation.

Second of the Sevenwaters trilogy of novels about the last days of heroic Ireland, Son of the Shadows takes up the story of the children of Sorcha, who saved her enchanted brothers, and Hugh, the Briton she married. Sorcha's daughter Liadan is a gifted seer and healer who thinks, in spite of her visions, that she knows what the future has in store for her--caring for her dying mother and then an alliance marriage to Eamonn. A chance meeting on the road carries her off to care for a dying man--one of the mercenaries of the sinister Painted Man, Eamonn's archenemy and a killer for hire. Liadan discovers that she cannot choose whom she loves and that she and the Painted Man are as bound up in destiny as her mother and father were before her.

This is an intelligent historical romance in which the supernatural is a part of the character's everyday lives to an extent that makes it hard to think of the book as specifically a fantasy--these are people to whom the beings of forest speak on a regular basis and to whom sorcery is real. --Roz Kaveney, Amazon.co.uk

Juliet Marillier was born in Dunedin, New Zealand, a town with strong Scottish roots. She currently lives in a rural area of Western Australia, sharing her house with a cat and a dog. A university graduate in music and languages, she has had a varied career that includes working for government agencies, opera singing, and raising four children. Juliet now writes full time. Her lifelong interest in myth, legend, folklore and traditional music is a strong influence on both style and theme in her writing. A passion for early British history, reflecting her Celtic ancestry, is evident in her choice of settings.

Juliet Marillier achieved international recognition in 1999 with the publication of her award-winning novel Daughter of the Forest. This is the first book of the Sevenwaters Trilogy, a historical fantasy set in Ireland and Britain in the ninth century, and is loosely based on the traditional fairy tale, The Six Swans. The second book in the series, Son of the Shadows, won the 2000 Aurealis Award for best fantasy novel. Child of the Prophecy completes this trilogy.

Juliet Marillier's second series is based on the first Viking voyage from Norway to Orkney, and weaves history and folklore into a saga of adventure, romance and magic. The series is made up of two novels, Wolfskin and Foxmask. Juliet is currently working on a new trilogy set in the north of Britain in the time of the Picts.

Juliet is a member of the druid order OBOD and of the Australian Greens Party, reflecting her commitment to environmental causes.

1. Son of the Shadows: Book 2 of the Sevenwaters Trilogy

Book Description Voyager, 2001. Paperback. Condition: Used; Good. **Simply Brit** Shipped with Premium postal service within 24 hours from the UK with impressive delivery time. We have dispatched from our book depository; items of good condition to over ten million satisfied customers worldwide. We are committed to providing you with reliable and efficient service at all times. Seller Inventory # mon0001689802

2. Son of the Shadows (The Sevenwaters Trilogy, Book 2)

Book Description Hardback. Condition: Very Good. The book has been read, but is in excellent condition. Pages are intact and not marred by notes or highlighting. The spine remains undamaged. Seller Inventory # GOR001384645

3. Son of the Shadows (The Sevenwaters Trilogy, Book 2)

Book Description Hardback. Condition: Good. The book has been read but remains in clean condition. All pages are intact and the cover is intact. Some minor wear to the spine. Seller Inventory # GOR001546406

4. Son of the Shadows (The Sevenwaters Trilogy, Book 2)