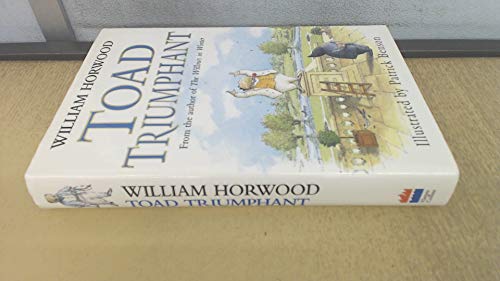 This stunning sequel follows the further adventures of four of the most beloved characters in English literature: loyal Mole, resourceful Water Rat, stern but wise Badger, and of course, capricious, irresistible Toad. In this new tale, the comfortable bachelor world of the River Bank is thrown into turmoil by the arrival of a formidable female character who seems to win Toad's heart. Recognizing the familiar danger signals, his long-suffering companions must do all that they can to save the infatuated Toad from himself. Enriched once again by the delightful illustrations of Patrick Benson, Toad Triumphant is another captivating tale for audiences and imaginations everywhere.

Since the publication of ‘The Willows in Winter William Horwood has received letters from hundreds of readers thanking him for recapturing the spirit of Kenneth Grahame’s great work so faithfully. He is also the author of the two bestselling trilogies about the moles of Duncton Wood, and the new ‘The Wolves of Time series.

In a second sequel to Kenneth Grahame's classic The Wind in the Willows, Horwood (The Willows in Winter, 1994) revisits the River Bank and the beloved characters of Toad, Mole, Rat, and Badger. Portraits of loyal Mole, practical Rat, and wise Badger remain faithfully intact (in text as well as in Benson's black-and- white illustrations); however, Horwood seems captivated with Grahame's own notion of ``an altered Toad,'' and much of the plot dances around this idea. Toad's normal vanity and conceit are seen in ``alarming transmutation,'' thanks to Cupid's arrow, which has left Toad smitten and contemplating matrimony. A parallel plot bears the overriding theme of immortality, which prompts Mole and Rat to journey up river in their desire to ``get a little nearer to the mystery we have called Beyond.'' The two threads intersect at journey's end, where Toad willfully escapes ``the eternal bond'' of marriage, proving himself as irresolute as ever. The formal style of writing adequately mimics Grahame's own; that, and the sophisticated themes may be better appreciated by adults who loved the original. Nevertheless, the River Bank animals have fans who will be happy to pause awhile in such good company. (Fiction. 11+) -- Copyright ©1996, Kirkus Associates, LP. All rights reserved.