Items related to Beyond the Coral Sea

Moran, Michael Beyond the Coral Sea

Beyond the Coral Sea 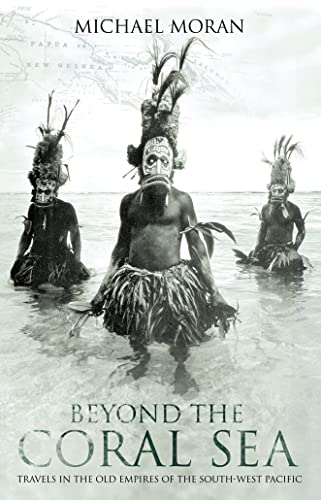 This text presents a romantic and adventurous look at the remarkably diverse cultures of the hidden paradise islands surrounding Papua New Guinea. The islands of the Coral, Solomon and Bismarck Seas were the last inhabited places on earth to be explored by Europeans and remain largely unspoilt, despite the former presence of German, British and Australian colonial rulers. Michael Moran describes eccentric residents past and present such as "Queen Emma" of New Britain, born of an American father and a Samoan mother, who built up a large empire of copra plantations, traded in the fabled obsidian (black volcanic glass) and entertained on a lavish scale with imported food and French champagne. Superstition, magic rites and the occult are explored as well as the historic anthropological work of Malinowski in the Trobriand Islands; and the author encounters a host of adventurers, mercenaries, explorers, missionaries and prospectors on his wide-ranging travels

East of Java and west of Tahiti a bird of dazzling plumage stalks the Pacific over the Cape York Peninsula of Australia. In her wake, she spills clusters of emeralds on the surface of the deep. These are the unknown paradise islands of the Coral, Solomon and Bismarck Seas lying off the east coast of Papua New Guinea.

Along the way Michael Moran explores the role of superstition, magic rites and the occult in the lives of the islanders, including the trading route of the Kula Ring which unites many tribal island groups in a mystical exchange of symbolically valuable objects, one set travelling clockwise around the ring, the other anti-clockwise. His narrative is interwoven with the stories of eccentric residents past and present – such as the self-styled ‘Queen Emma’ of New Britain, who was born of an American father and a Samoan mother and built up a large empire of copra plantations, as well as trading in the fabled obsidian (black volcanic glass) and entertaining on a lavish scale with imported food and French champagne. Moran describes the historic anthropological work of Malinowski in the Trobriand Islands and also catches up with some of the adventurers, mercenaries, explorers, missionaries and prospectors he has encountered on previous journeys.

The islands were the last inhabited place on earth to be explored by Europeans and even today many remain largely unspoilt, despite the former presence of German, British and even Australian colonial rulers. In addition there has been a recent resurgence of cannibalism in the remoter areas. But rather than a tale of cannibals and blood, this is a journey in the romantic and adventurous spirit of Robert Louis Stevenson and an exploration of encroaching change in remarkably diverse cultures.

The conception of this travel book took place in London one wet and windy morning as I sat on the 73 bus on my daily grind down Oxford Street to work in Victoria. After years on the treadmill, I was bored rigid with the regularity my London existence. My youthful period living on Norfolk Island among the descendants of the mutiny on he Bounty, a thousand miles off the eastern Australian coast, had created a permanent obsession with the isolation of Pacific islands. I dreamed of escape and adventure, but this time I would act, not luxuriate in impotent nostalgia and reminiscence.

As a boy of 13 at Public School in Australia, I had visited a pal whose father owned a copra plantation on the island of New Britain. It was an impossibly exotic and adventurous holiday which I never ever forgot. I decided to travel to the most remote and unvisited islands I could think of, those of the Bismarck Archipelago and Solomon Sea. This group of islands is north of the mainland of Papua New Guinea, a couple of degrees below the equator. No-one had written about them as a group for almost a hundred years.

Boredom fled. I ignored all the warnings and discovered that the modern country, particularly the island provinces, could not be further from the unfortunate violent conception. Travel writers seldom choose the diverse and achingly sensual atmosphere of the tropical Pacific islands as their subject.

The result of that incredible journey is this book, written in Sydney and London. Altogether, It took me almost four years. I feel absolutely rejuvenated and have hardly boarded a 73 bus since returning to London from those enchanted islands. If you feel life has forced you into an inescapable rut, just take courage and follow your dreaming heart - the satisfaction is priceless.

1. BEYOND THE CORAL SEA : Travels in the Old Empires of the South-West Pacific

2. Beyond the Coral Sea

3. Beyond the Coral Sea

4. Beyond the Coral Sea

5. Beyond the Coral Sea Moran, Michael