Items related to The players and the game

SYMONS, Julian The players and the game

The players and the game 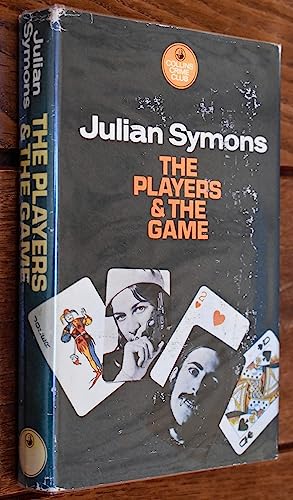 ‘Count Dracula meets Bonnie Parker. What will they do together? The vampire you’d hate to love, sinister and debonair, sinks those eye teeth into Bonnie’s succulent throat.’ Is this the beginning of a sadistic relationship or simply an extract from a psychopath’s diary? Either way it marks the beginning of a dangerous game that is destined to end in chilling terror and bloody murder.

Julian Symons is primarily remembered as a master of the art of crime writing. However, in his eighty-two years he produced an enormously varied body of work. Social and military history, biography and criticism were all subjects he touched upon with remarkable success, and he held a distinguished reputation in each field. His novels were consistently highly individual and expertly crafted, raising him above other crime writers of his day. It is for this that he was awarded various prizes, and, in 1982, named as Grand Master of the Mystery Writers of America - an honour accorded to only three other English writers before him: Graham Greene, Eric Ambler and Daphne Du Maurier. He succeeded Agatha Christie as the president of Britain's Detection Club, a position he held from 1976 to 1985, and in 1990 he was awarded the Cartier Diamond Dagger from the British Crime Writers for his lifetime's achievement in crime fiction. Symons died in 1994.

‘Unusual, ingenious and fascinating as a poisonous snake' (Sunday Telegraph)

Buy Used
"Slight wear to spine, covers and... Learn more about this copy

1. Players and the Game Symons, Julian

2. The players and the game

Book Description Crime Club/Collins. Hardcover. Condition: Good. A copy that has been read, but remains in clean condition. All pages are intact, and the cover is intact. The spine may show signs of wear. Pages can include limited notes and highlighting, and the copy can include previous owner inscriptions. At ThriftBooks, our motto is: Read More, Spend Less. Seller Inventory # G0002316323I3N00

3. The players and the game

4. The Playes and the Game

5. The players and the game

Book Description Crime Club/Collins, 1972. Condition: Good. A+ Customer service! Satisfaction Guaranteed! Book is in Used-Good condition. Pages and cover are clean and intact. Used items may not include supplementary materials such as CDs or access codes. May show signs of minor shelf wear and contain limited notes and highlighting. Seller Inventory # 0002316323-2-4

6. The Players and the Game

7. Players and the Game

8. The players and the Game

9. The Players and the Game