Items related to Lazarus Only Done It Once

Lally, Pat; Baxter, Neil Lazarus Only Done It Once

Lazarus Only Done It Once 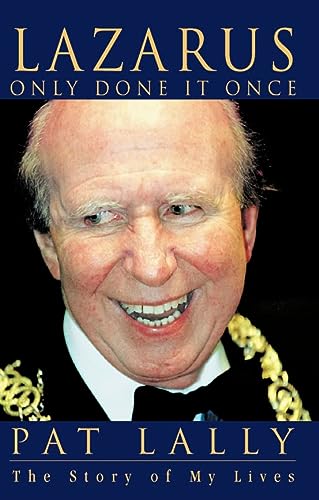 Pat Lally, ex-Lord Provost of Glasgow is a local hero in the city - he was the prime mover behind the building of the Glasgow Royal Concert Hall, Glasgow's victories as both European City of Culture and 1999 City of Architecture and Design, and many initiatives designed to better the lives of the inhabitants of Glasgow. A great character and a brilliant local politician, he has made numerous comebacks from apparent political "death" during the course of a colourful career, while his steadfast pursuit of what he believes to be best for Glasgow has made him friends and enemies on both sides of the political divide. His greatest challenge came when the Labour Party ordered an investigation into politically motivated allegations of sleaze at the heart of Glasgow city council during his time as leader of the council and his reign as Lord Provost. The worst moment of his political life came when, after a one-sided investigation and trial, he was suspended from the Labour Party. This is his story.

A local politician who has worked for Glasgow all his life, Pat Lally rose through the ranks as a councillor, and eventually became Lord Provost of Glasgow.

Buy Used
Daily dispatch from the UK. Learn more about this copy

1. Lazarus Only Done It Once: The Story of My Lives

2. Lazarus Only Done It Once: The Story of My Lives

3. Lazarus Only Done It Once: The Story of My Lives

Book Description Hardback. Condition: Very Good. The book has been read, but is in excellent condition. Pages are intact and not marred by notes or highlighting. The spine remains undamaged. Seller Inventory # GOR002191340