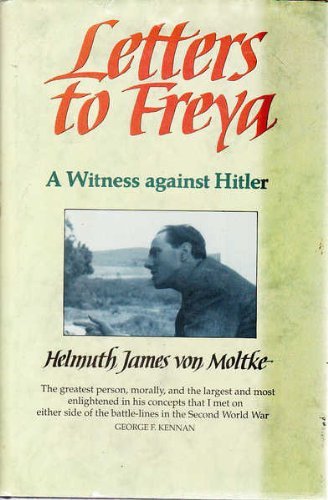 Count Helmuth James von Moltke was an authentic German hero. A brilliant young Oxford-educated international lawyer, he was in 1939 a rising star in the German Foreign Ministry - and passionately opposed to Hitler. Unable, by faith and political foresight, to condone the use of violence in the struggle against the Nazis, he turned his formidable political and lawyerly talents loose in two great campaigns. By wielding his expertise in law like a bureaucratic monkey wrench to counter the deportation and murder of Jews and the execution of captured prisoners, he saved thousands of lives. And, as the war dragged on, he brought together in secret the best possible minds among fellow resisters to plan the new Germany that would have to be ready when chaos and defeat overtook Hitler. Almost every day that he was separated from his young wife, Freya, he wrote to her - vivid detailed, remarkable letters about all he saw, all he knew, all he was doing. Betrayed and arrested in 1944, he wrote her his extraordinary farewell on the morning of his execution in 1945.