Items related to From Here to Eternity

Jones, James From Here to Eternity 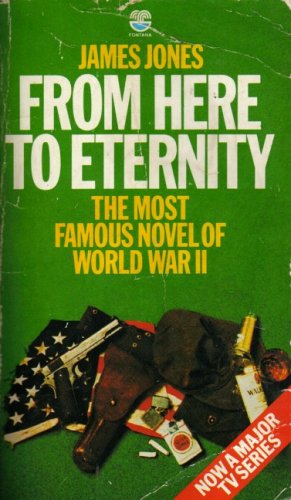 Diamond Head, Hawaii, 1941.  Pvt. Robert E. Lee Prewitt is a champion welterweight and a fine bugler.  But when he refuses to join the company's boxing team, he gets "the treatment" that may break him or kill him.  First Sgt. Milton Anthony Warden knows how to soldier better than almost anyone, yet he's risking his career to have an affair with the commanding officer's wife.  Both Warden and Prewitt are bound by a common bond:  the Army is their heart and blood . . .and, possibly, their death.

In this magnificent but brutal classic of a soldier's life, James Jones portrays the courage, violence and passions of men and women who live by unspoken codes and with unutterable despair. . .in the most important American novel to come out of World War II, a masterpiece that captures as no ther the honor and savagery of men.
From the Paperback edition.

This is a long, satisfying, commanding novel of the soldiers who were poised on the brink of real manhood when World War II flung them unceremoniously into that abyss. Private Robert E. Lee Prewitt is the nonconformist hero who refuses to box at Schofield Barracks and is slowly destroyed by his own rebelliousness. Around him, others are fighing their own small battles--and losing. It's worth noting that Jones' 1951 audience was shocked by his frank language and the sexual preoccupations of his characters.

James Jones (1921–1977), one of the major novelists of his generation, is known primarily as the author of fiction that probes the effects of World War II on the individual soldier. Born in Robinson, Illinois, Jones entered the U.S. Army and had the distinction of being the only individual who would become a major writer to witness the attack by the Japanese on Pearl Harbor. A member of the U.S. 27th Infantry Regiment, Jones was wounded at Guadalcanal and returned to Robinson, where he started to write about his experiences. After shelving his unpublished first novel, They Shall Inherit the Laughter, Jones completed the critically acclaimed international bestseller From Here to Eternity. Jones’s other novels are Some Came Running, The Pistol, The Thin Red Line, A Touch of Danger, and Whistle.

Book Description Condition: Good. Ships from the UK. Former library book; may include library markings. Used book that is in clean, average condition without any missing pages. Seller Inventory # 38514386-20

Shipping: US$ 6.67
From United Kingdom to U.S.A.
Destination, rates & speeds