Items related to Sharpe's Regiment: Richard Sharpe and the Invasion...

Sharpe's Regiment: Richard Sharpe and the Invasion of France, June to November 1813 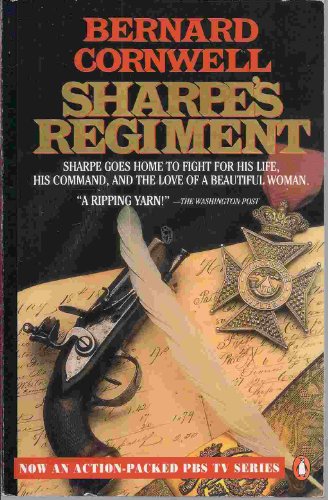 Major Sharpe should be fighting the French -- but his worst enemies are in England! Major Richard Sharpe's men were in mortal danger -- not from the French, but from the bureaucrats of Whitehall. Unless reinforcements could be brought from England, the depleted South Essex would be disbanded, their troops scattered throughout the army. Determined not to see his regiment die, Sharpe returns to England and uncovers a nest of well-bred, high-ranking traitors, any one of whom could utterly destroy his career with a word, or a stroke of the pen. Sharpe is forced into the most desperate gamble of his life -- and not even the influence of the Prince Regent may be enough to save him!

Bernard Cornwell was born in London, raised in Essex and now lives in the USA. In addition to the Sharpe series, he is the author of the Arthurian series, the Warlord Chronicles; the Starbuck Chronicles on the American Civil War; Stonehenge; Gallows Thief; the Grail Quest series; and his new series, set during the reign of King Alfred. His latest novel is Azincourt.

In the eighth volume in this superb series on the Napoleonic Wars (Sharpe's Siege, Audio Reviews, LJ 11/1/96), Sharpe must return from Spain to London to investigate why his supply of recruits has dried up. It's 1813, and Sharpe discovers a corrupt political enemy has diverted his recruits to sell them at auction. When he gets close to the source, the ring leaders try to kill him. Sharpe risks charges of treason to expose corruption at the highest level. The novel exposes the recruiting practices that, in fact, scandalized England and brought down prominent royal advisors. As usual, past and present sweethearts try to save Sharpe when danger threatens. Narrator-supreme Frederick Davidson provides the flavor of British life in the early 19th century on the lowest and highest levels as well as battlefield excitement as British troops cross into France from Spain. For young and old alike, this program is highly recommended.?James Dudley, Copiague, N.Y.
Copyright 1996 Reed Business Information, Inc.