Items related to Reflections on the Psalms

Reflections on the Psalms 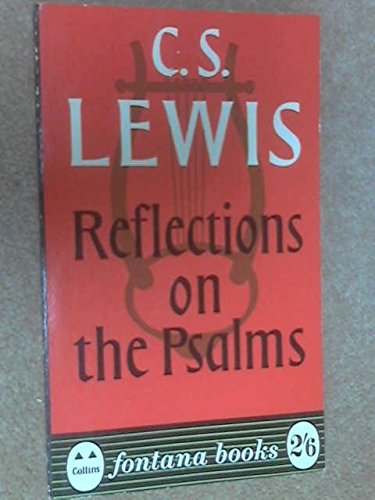 " We delight to praise what we enjoy because the praise not merely expresses but completes the enjoyment; it is its appointed consummation. "
The Psalms were written as songs; we should read them as poetry, in the spirit of lyric, not as sermons or instructions. But they are also shrouded in mystery, and in this careful reading from one of our most trusted fellow travelers, C.S. Lewis helps us begin to reveal their meaning in our daily lives and in the world. Reflecting again and anew on these beloved passages, we can find both joy and difficulty, but also, always, real enlightenment and moments of transcendent grace.
"This book may not tell the reader all he would like to know about the Psalms, but it will tell him a good deal he will not like to know about himself." "Times Literary Supplement"
"[Lewis] . . . displays in this volume the same keen insight and gifted tongue that have made him one of the most highly respected essayists using the English language." "Chicago Sunday Tribune"
"Full of illuminating observations." "New York Times"
C. S. (Clive Staples) Lewis (1898 1963), one of the great writers of the twentieth century, also continues to be one of our most influential Christian thinkers. He wrote more than thirty books, both popular and scholarly, including The Chronicles of Narnia series, "The Screwtape Letters," "The Four Loves," "Mere Christianity," and "Surprised by Joy."
"

Clive Staples Lewis (1898-1963) was one of the intellectual giants of the twentieth century and arguably one of the most influential writers of his day. He was a Fellow and Tutor in English Literature at Oxford University until 1954, when he was unanimously elected to the Chair of Medieval and Renaissance Literature at Cambridge University, a position he held until his retirement. He wrote more than thirty books, allowing him to reach a vast audience, and his works continue to attract thousands of new readers every year. His most distinguished and popular accomplishments include Out of the Silent Planet, The Great Divorce, The Screwtape Letters, and the universally acknowledged classics The Chronicles of Narnia. To date, the Narnia books have sold over 100 million copies and have been transformed into three major motion pictures.

1. Reflections on the Psalms

Book Description Paperback. Condition: Fair. A readable copy of the book which may include some defects such as highlighting and notes. Cover and pages may be creased and show discolouration. Seller Inventory # GOR001141449

Shipping: US$ 7.23
From United Kingdom to U.S.A.
Destination, rates & speeds